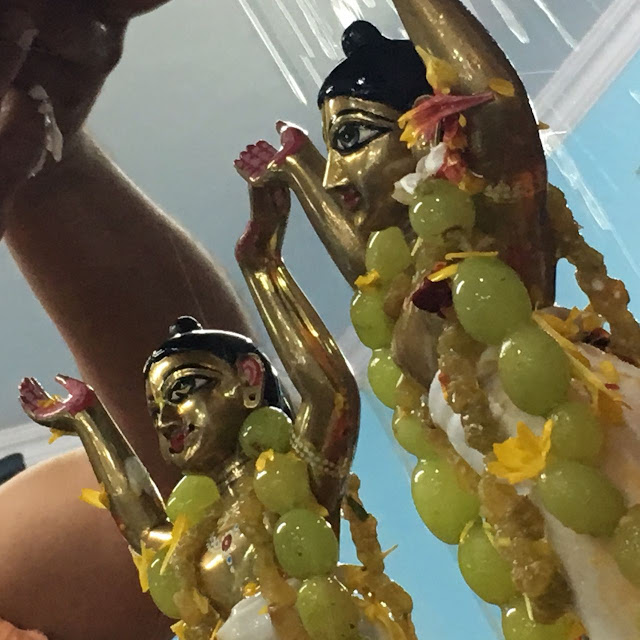 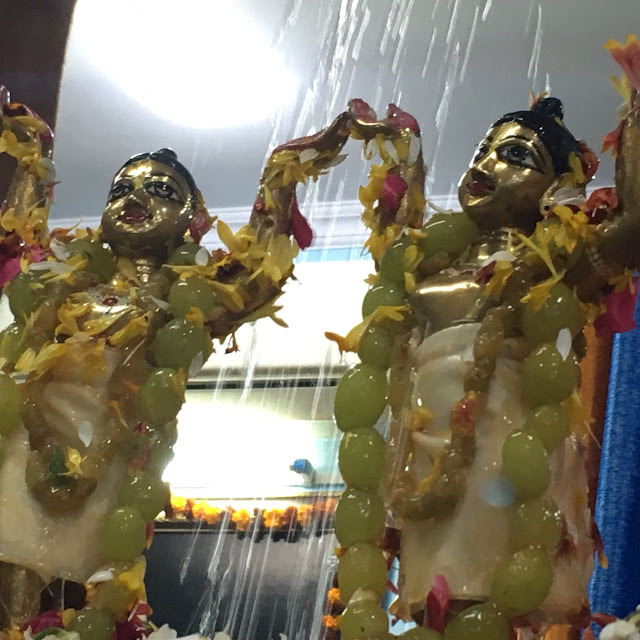 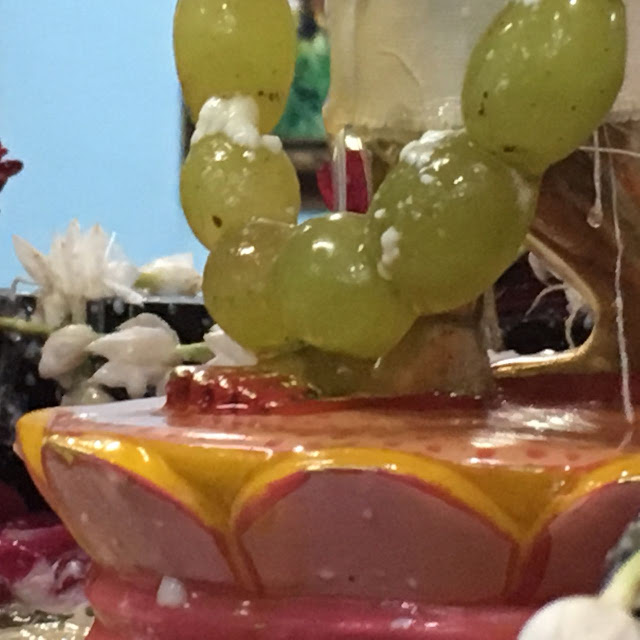 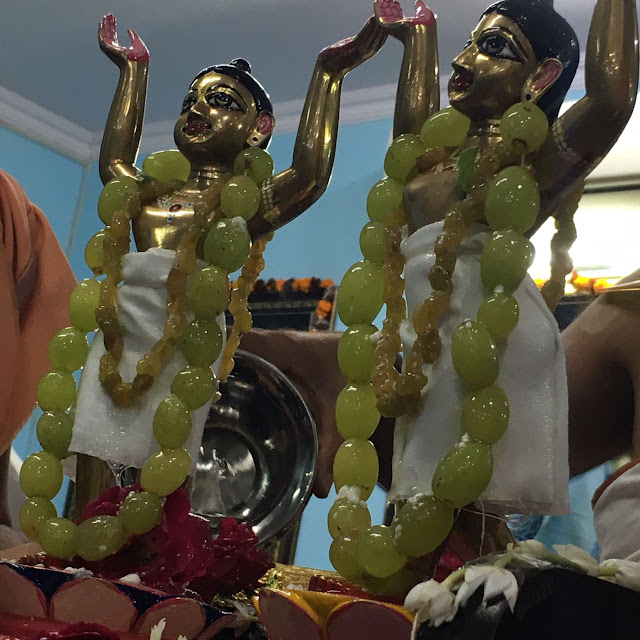 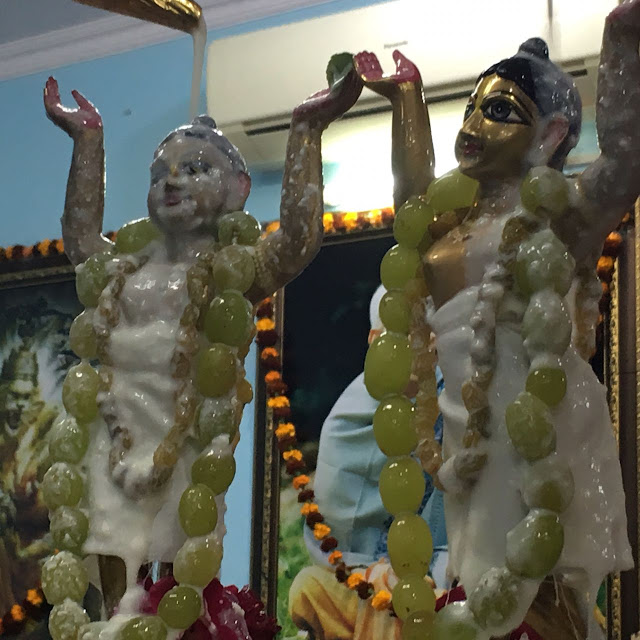 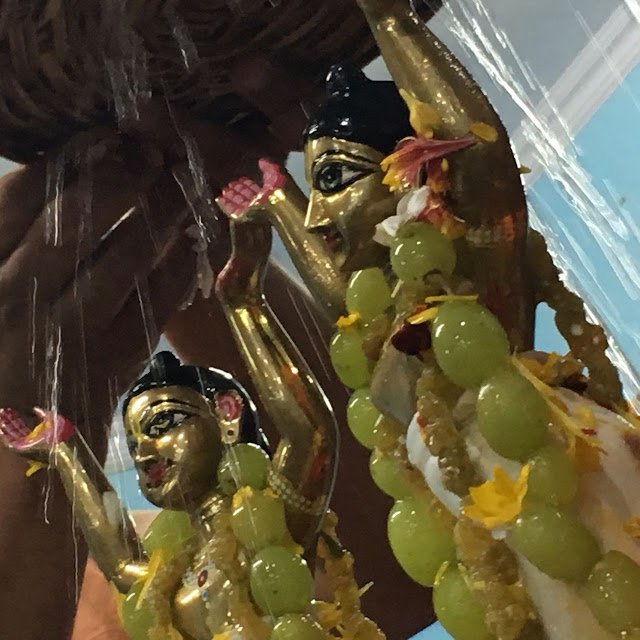 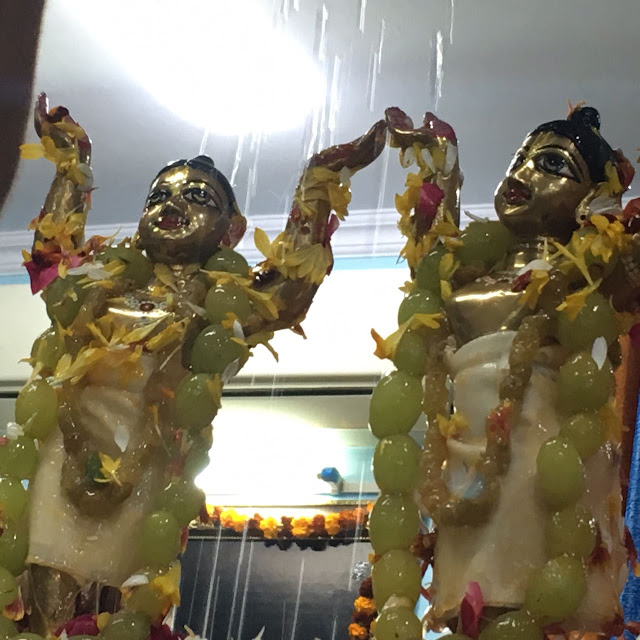 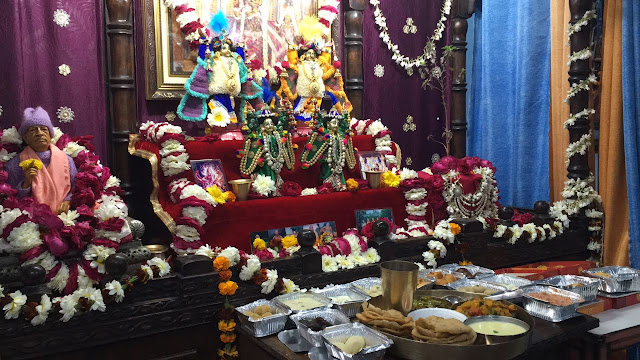 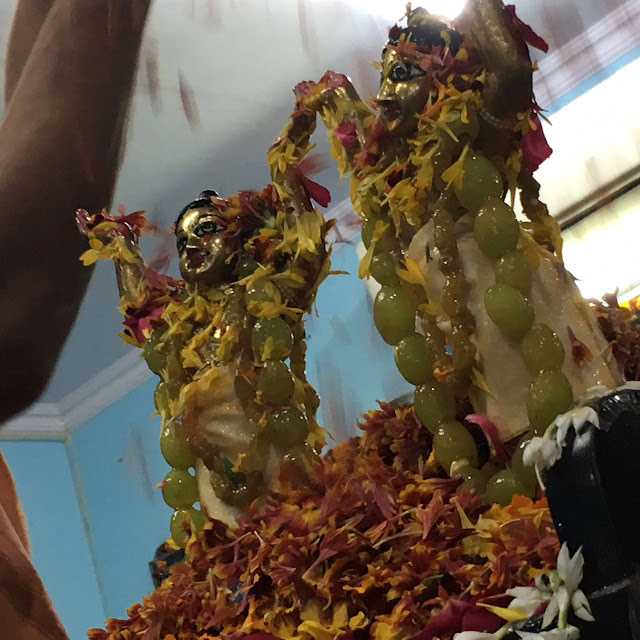 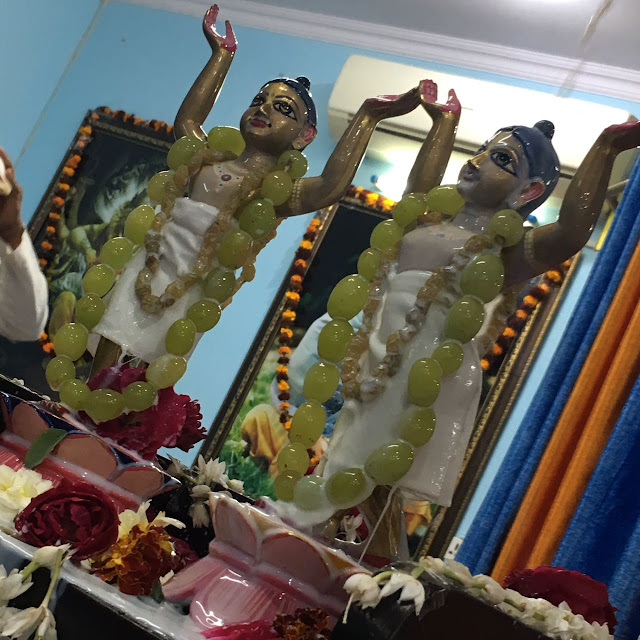 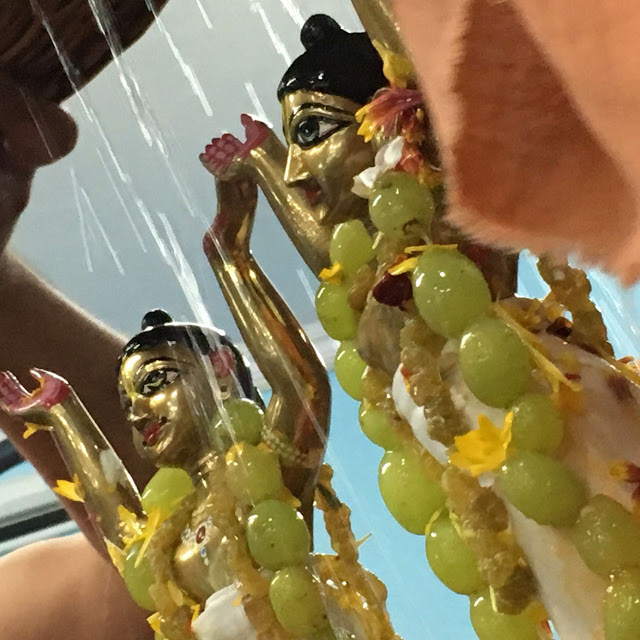 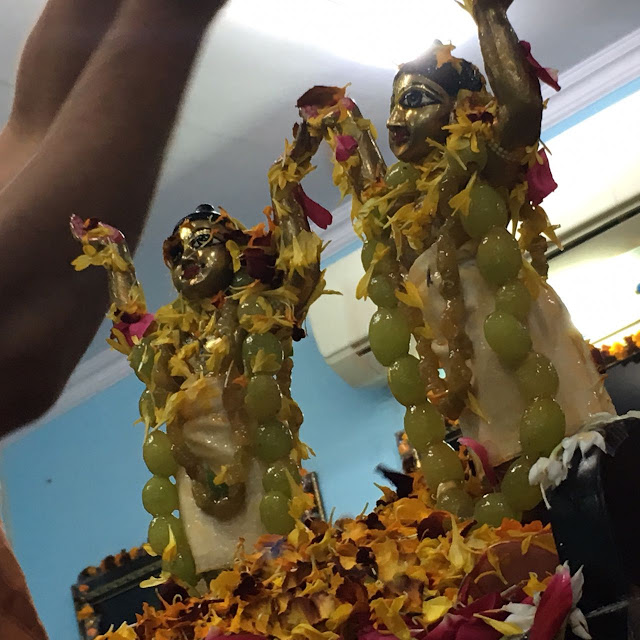 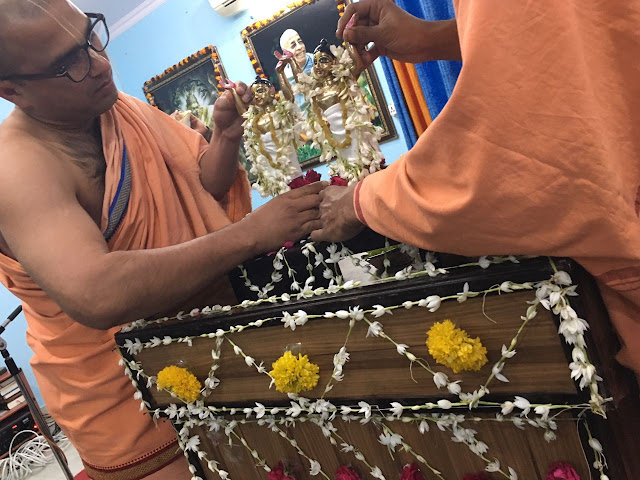 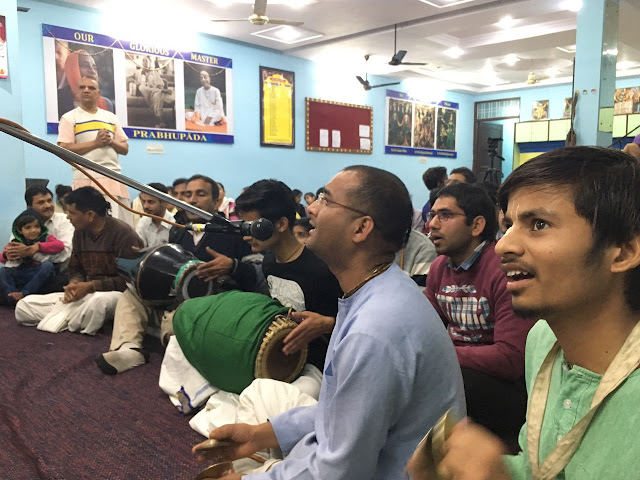 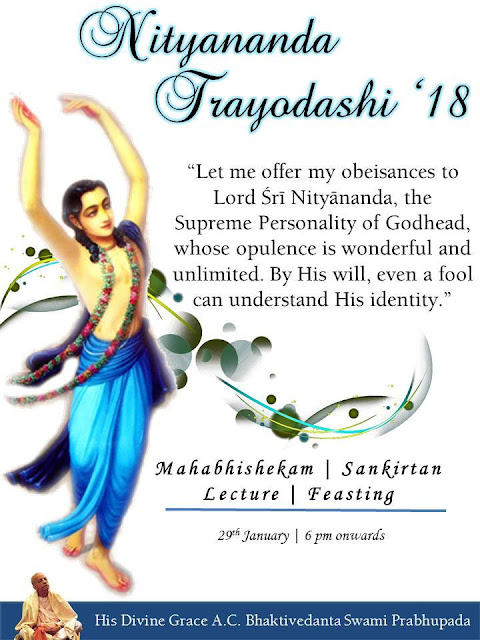 
* Nityananda — He Who embodies eternal bliss


* Padmavati-suta — The dear son of Padmavati


turnam caitanya-devasya karuna-bhajanam bhavet
“such a person becomes free from all difficulties & attains all their most cherished desires. Very soon they become the object of Lord Chaitanya-deva’s mercy.”
Posted by Hare Krishna Community Jaipur at 16:14 No comments: 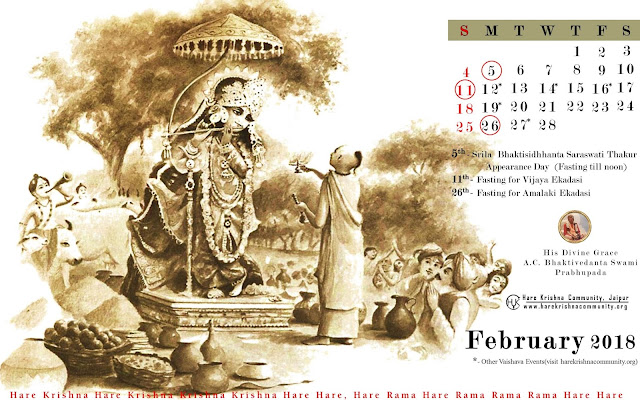 "The moment was very valuable" 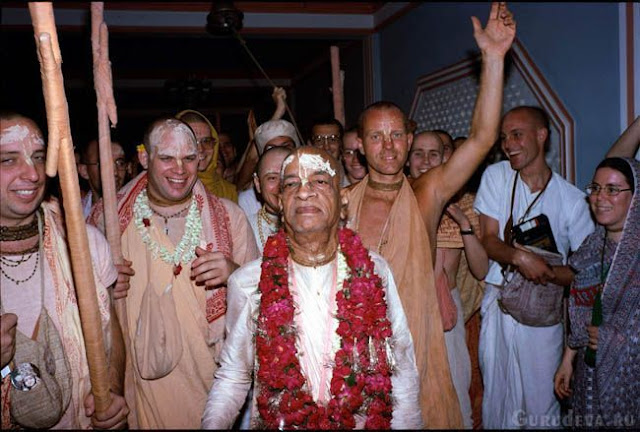 Posted by Hare Krishna Community Jaipur at 20:21 No comments: 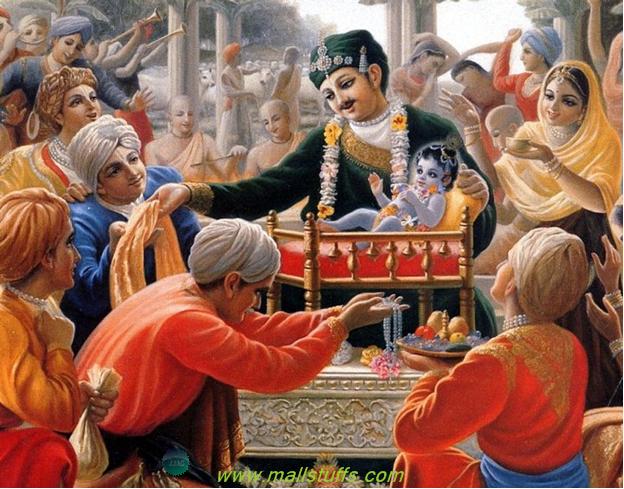 
"In Vṛndāvana You also have Your father's elder brothers, Your father's younger brothers, maternal uncles, husbands of Your father's sisters and many cowherd men. There are also cowherd boy friends, and You eat twice a day, morning and evening, in the house of each and every one."

PURPORT
In Dvārakā, Lord Kṛṣṇa had eighteen mothers like Devakī, Rohiṇī and others. Besides these was. His foster mother Yaśodā in Vṛndāvana. Lord Kṛṣṇa also had two uncles, who were brothers of Nanda Mahārāja. As stated by Śrīla Rūpa Gosvāmī in his Śrī-kṛṣṇa-gaṇoddeśa-dīpikā, upanando 'bhinandaś ca pitṛvyau pūr-va-jau pituḥ: "The elder brothers of Nanda Mahārāja were Upananda and Abhinanda." Similarly, in the same book the names of the younger brothers of Nanda Mahārāja are given. Pitṛvyau tu kanīyāṁsau syātāṁ sannanda-nandanau: "Sannanda and Nandana, or Sunanda and Pāṇḍava, were the younger brothers of Kṛṣṇa's father, Nanda Mahārāja." Śrī Kṛṣṇa's maternal uncles were also described there. Yaśodhara-yaśodeva-sudevādyās tu mātulāḥ: "Yaśodhara, Yaśodeva and Sudeva were the maternal uncles of Kṛṣṇa." Kṛṣṇa's uncles are also mentioned. Mahānīlaḥ sunīlaś ca ramaṇāv etayoḥ kramāt: "Mahānīla and Sunīla are the husbands of Kṛṣṇa's aunts." 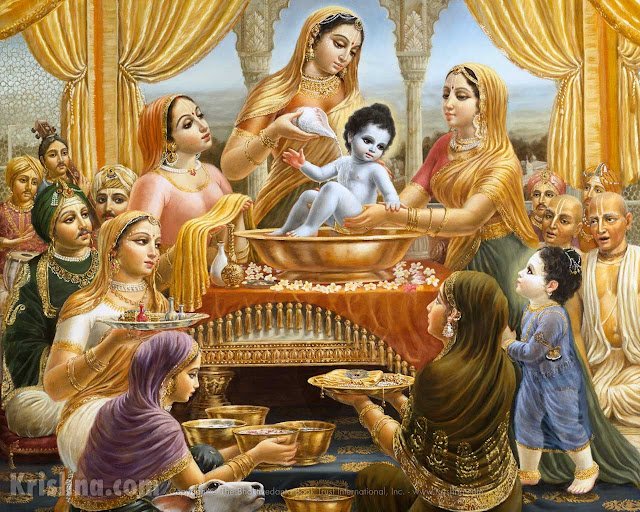 Posted by Hare Krishna Community Jaipur at 14:06 No comments:

They are paid for fighting 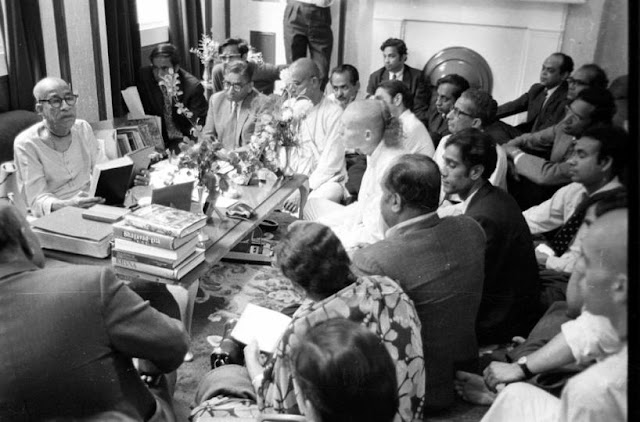 Madhudviṣa: We brought back Wally one picture from India on the battle of Kurukṣetra of Abhimanyu. Abhimanyu's head was there, and Karṇa was on the ground with his chariot, and Arjuna was about to kill him, and Kṛṣṇa was directing him to kill. So I told Wally the story that when Abhimanyu was surrounded by the mahārathīs, there was no mercy then, so now Karṇa was objecting that...
Prabhupāda: Injustice.
Madhudviṣa: ...he cannot shoot a man if he gets off his chariot. And Kṛṣṇa said, "There was no mercy with Abhimanyu, so therefore there will be no mercy now."
Prabhupāda: Tit for tat. (laughter)
Guest 1: But where was the generosity then?
Prabhupāda: That is happening, tit for tat.
Guest 1: Was that generosity, or...? Where was the generosity?
Prabhupāda: No. That is war tactics. That is war tactics. Sometimes we have to use war tactics because we have to own victory. But they were generous because in the Battlefield of Kurukṣetra they would fight like anything, like enemies, but at night they were friends. The one man is going. Just like sportsman. They fight during the play, but after that, they are friends, talking together, drinking together, like that.
Guest 2: Like barristers and prosecutors.
Prabhupāda: (laughs) Yes. They are paid for fighting. (laughter) But when the fighting is over, they are friends.

Room Conversation -May 22, 1975, Melbourne
Posted by Hare Krishna Community Jaipur at 17:02 No comments:

Stimulation to ecstatic love of Kṛṣṇa 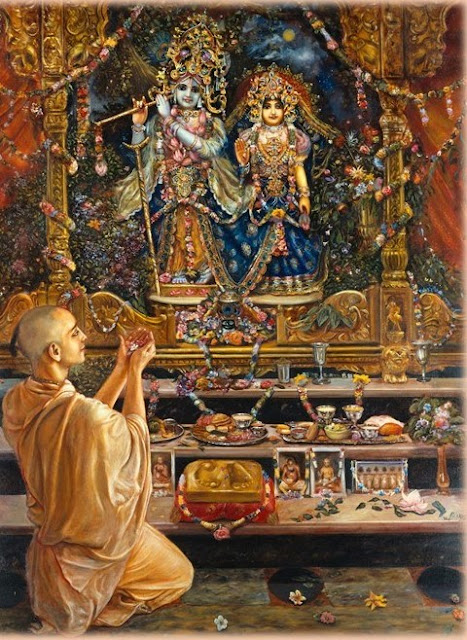 Some things which give impetus or stimulation to ecstatic love of Kṛṣṇa are His transcendental qualities, His uncommon activities, His smiling features, His apparel, His garlands, His flute, His buffalo horn, His leg bells, His conchshell, His footprints, His places of pastimes (such as Vṛndāvana), His favorite plant (tulasī), His devotee and the periodical occasions for remembering Him. One such occasion for remembrance is Ekādaśī, which comes twice a month on the eleventh day of the moon, both waning and waxing. On that day all the devotees remain fasting throughout the night and continuously chant the glories of the Lord

Posted by Hare Krishna Community Jaipur at 13:00 No comments:

Why is the Spiritual Master addressed as Prabhupada ? 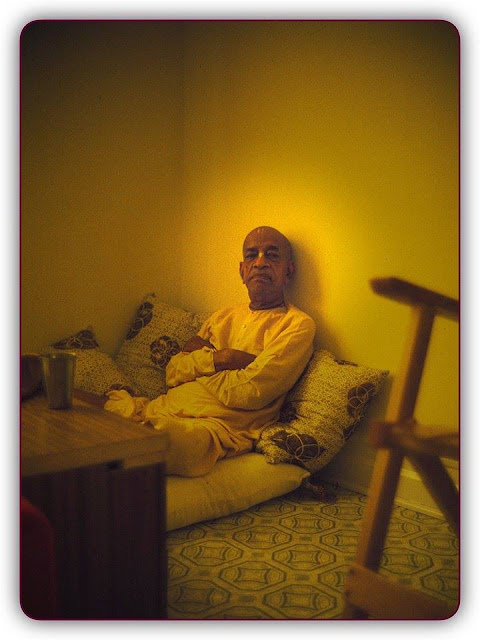 Srila Prabhupada...."The spiritual master is addressed as “Prabhupāda” because he is a completely self-realized soul. The word pāda means “position,” and Prabhupāda indicates that he is given the position of prabhu, or the Supreme Personality of Godhead, for he acts on behalf of the Supreme Personality of Godhead. Unless one is a prabhu, or controller of the senses, he cannot act as spiritual master, who is authorized by the supreme prabhu, or Lord Kṛṣṇa."
Śrīmad-Bhāgavatam  4.23.18
Srila Prabhupada...."The specific qualification for becoming the representative of the Lord is to be unaffected by the material modes of nature. The highest qualification of a person in the material world is to be a brāhmaṇa. But since a brāhmaṇa is in the mode of goodness, to be a brāhmaṇa is not sufficient for becoming a representative of the Lord. One has to transcend the mode of goodness also and be situated in unalloyed goodness, unaffected by any of the qualities of material nature. This stage of transcendental qualification is called śuddha-sattva, or vasudeva, and in this stage the science of God can be realized. As the Lord is not affected by the modes of material nature, so a pure devotee of the Lord is also not affected by the modes of nature. That is the primary qualification for being one with the Lord. A person who is able to attain this transcendental qualification is called jīvan-mukta, or liberated, even though he is apparently in material conditions. This liberation is achieved by one who constantly engages in the transcendental loving service of the Lord"
Śrīmad-Bhāgavatam 3.4.31
Posted by Hare Krishna Community Jaipur at 14:59 2 comments: 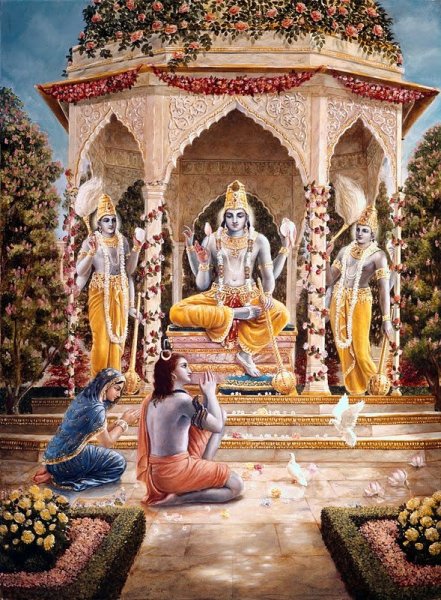 It is said that among all the devotees of the Personality of Godhead, Lord Śiva is the greatest. Thus the remnants of foodstuff left by him are accepted by other devotees as mahā-prasāda, or great spiritual foodstuff. The remnants of foodstuff offered to Lord Kṛṣṇa are called prasāda, but when the same prasāda is eaten by a great devotee like Lord Śiva, it is called mahā-prasāda. Lord Śiva is so great that he does not care for the material prosperity for which every one of us is so eager. Pārvatī, who is the powerful material nature personified, is under his full control as his wife, yet he does not use her even to build a residential house. He prefers to remain without shelter, and his great wife also agrees to live with him humbly. People in general worship goddess Durgā, the wife of Lord Śiva, for material prosperity, but Lord Śiva engages her in his service without material desire. He simply advises his great wife that of all kinds of worship, the worship of Viṣṇu is the highest, and greater than that is the worship of a great devotee or anything in relation with Viṣṇu.

Posted by Hare Krishna Community Jaipur at 12:47 No comments:

Our every day is a New Year 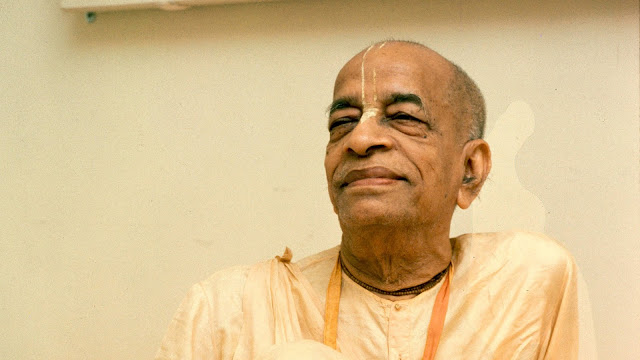 Prabhupada: Well, our every day is a New Year. Nava-navayauvana. Our Krsna consciousness is so nice, the more you advance, you see new year, new year. That's all. Nothing is old. People are seeing that they are simply chanting the old slogan, Hare Krsna.
Devotee: Hare Krsna.
Prabhupada: But we are feeling new pleasure in every moment.
Morning Walk -- January 3, 1974, Los Angeles

Posted by Hare Krishna Community Jaipur at 13:15 No comments: