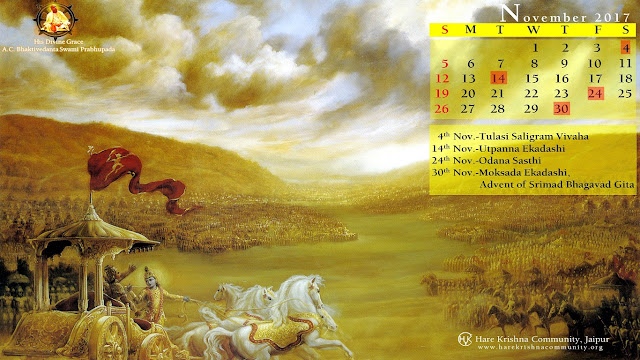 "Not all of the sons are faithful to their Father." 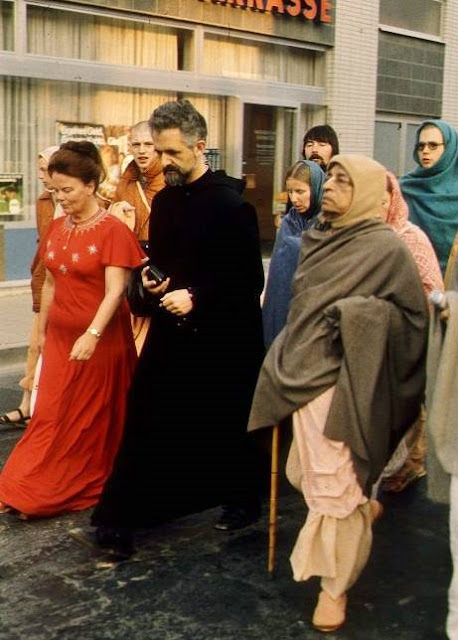 "Yes, it is a fact that no one can see Krsna without being a pure devotee of the Lord. Every living entity is the son of god, but not all of the sons are faithful to their Father. This is explained in Bhagavad Gita. So one who turns away from his father naturally cannot see his father; but the faithful son can see his father at any time. Under the circumstances, we can understand the word of John because amongst all the people of that place Jesus Christ was the only faithful son of God, Krsna. Lord Jesus says (John 6:46), “Not that any man hath seen the father, save he which is of God, he hath seen the Father.” So one who is a devotee of the Lord in pure love, who teaches others how to love God is the messenger of God and he can see God without any doubt." 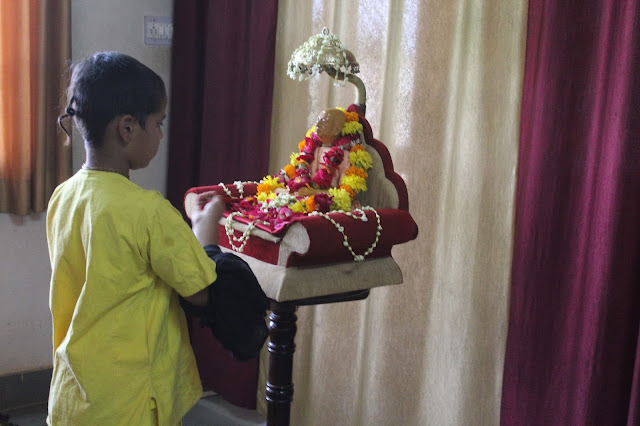 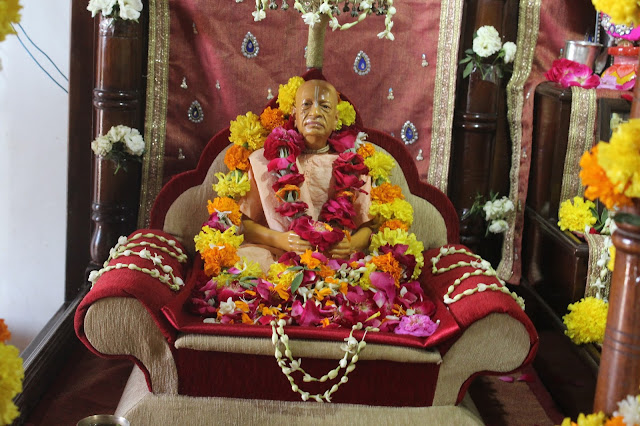 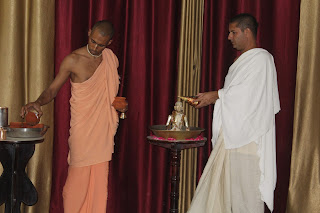 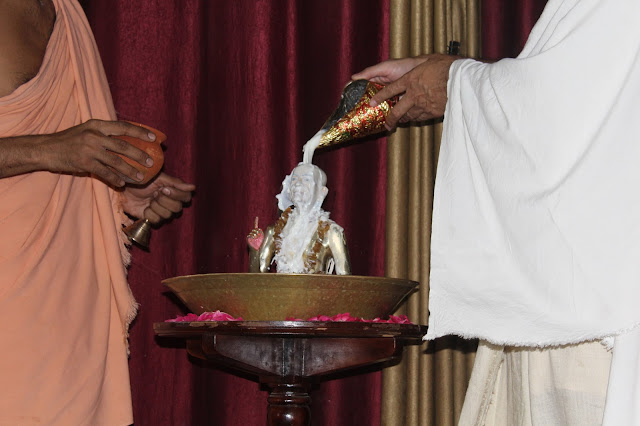 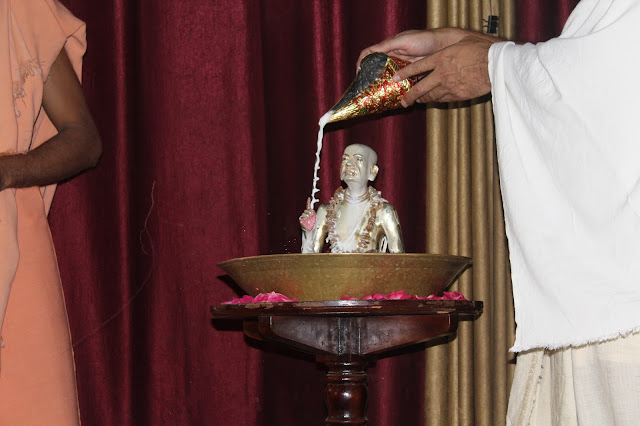 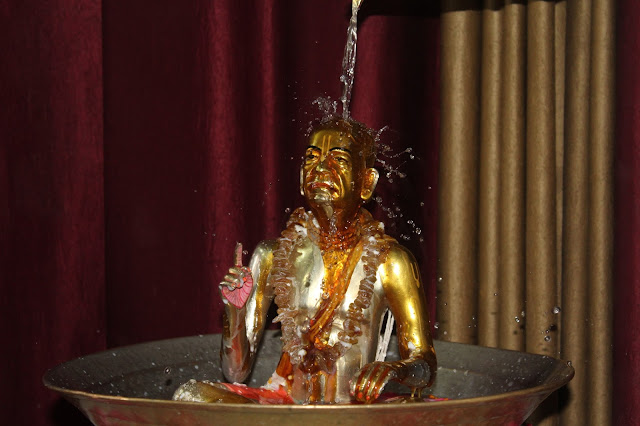 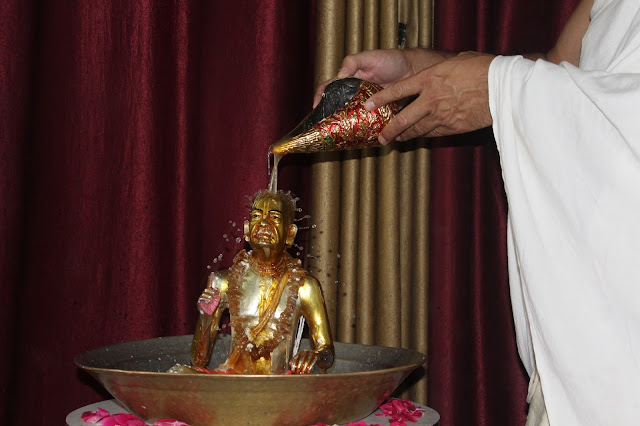 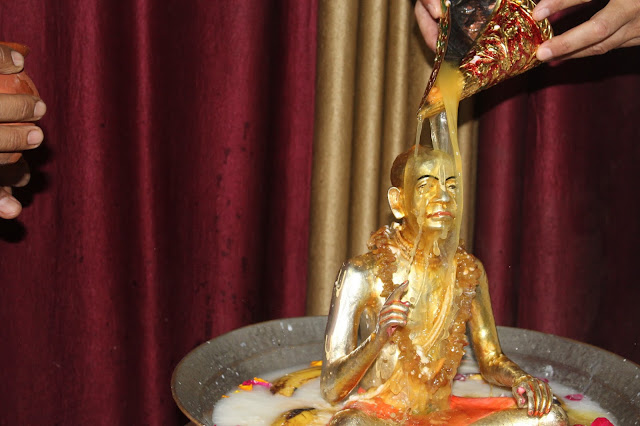 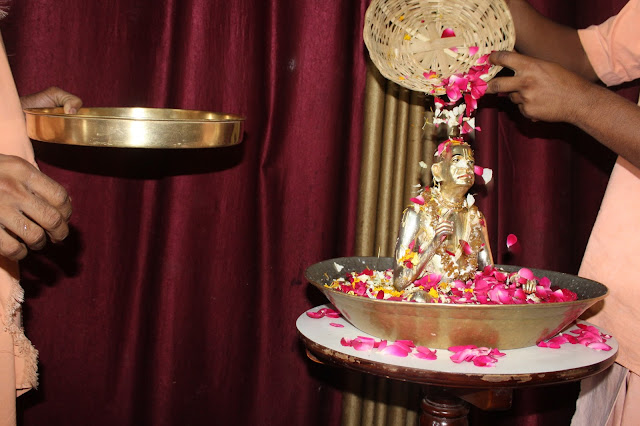 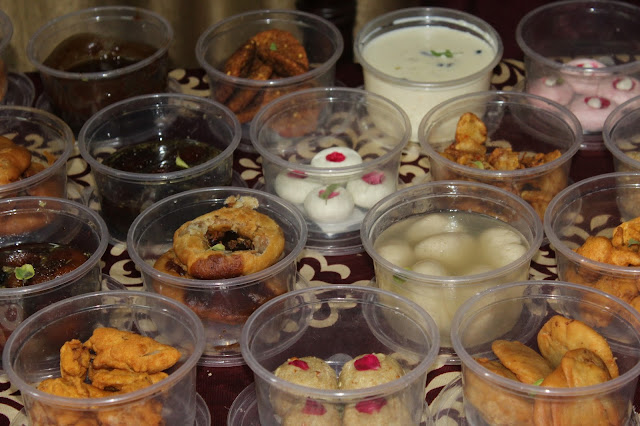 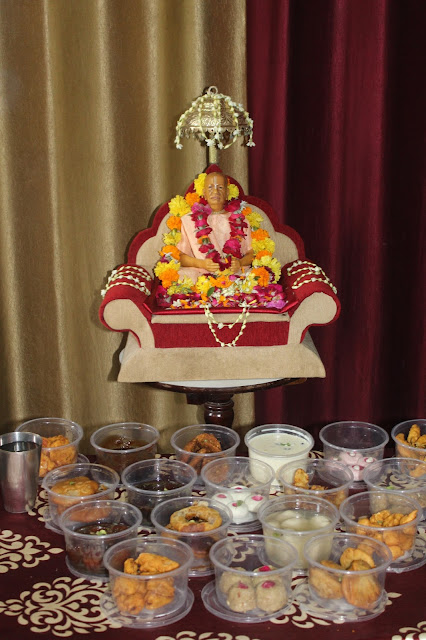 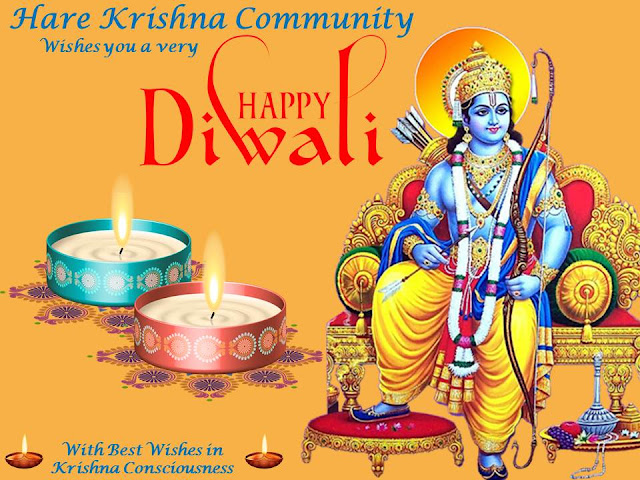 We wish you a very auspicious, safe and prosperous Diwali ahead.
Srila Prabhupada says in a letter that "Diwali ceremony can be observed in the temple by illuminating 100's of candles, indifferent parts of the temple, and offering a special Prasad to the Deity. This ceremony was observed by the inhabitants of Ayodhya, the Kingdom of Lord Ramachandra, while Lord Ramachandra was out of His Kingdom due to His 14 years banishment by the order of His father. His younger step-brother Bharat, took charge f the Kingdom and the day on which Lord Ramachandra took back the charge again from His brother, and seated on the throne, this is observed as Diwali, and Deepabali. Deepabali means the same thing - Deepa means candles, and bali means numerous. When numerous candles are lighted it is called Deepabali. In India, this Deepavali function is celebrated in a special auspicious occassion. This Deepabali function can be observed on 21st October, and Prasad can be distributed on 22nd October, during daytime, which is known as Govardhan Puja and Annakuta Ceremony. In India, in all Vaishnava temples, this ceremony is observed and 100's of people are given prasadam according to the capacity of the temple. So I understand that last year the Deepabali ceremony was held in the temple, and there was collection of $130.00. So you can do the needful."

Glories of the Devotees 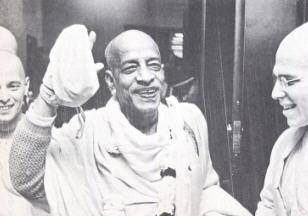 In the Garuḍa Purāṇa it is said:
kalau bhāgavataṁ nāma
durlabhaṁ naiva labhyate
brahma-rudra-padotkṛṣṭaṁ
guruṇā kathitaṁ mama
"In this Age of Kali, the fame of one who is known as a great devotee is very rare. However, such a position is superior to that of the great demigods like Brahmā and Mahādeva. This is the opinion of all spiritual masters."

"It is said that out of thousands of brāhmaṇas, one is qualified to perform sacrifices, and out of many thousands of such qualified brāhmaṇas expert in sacrificial offerings, one learned brāhmaṇa may have passed beyond all Vedic knowledge. He is considered the best among all these brāhmaṇas. And yet, out of thousands of such brāhmaṇas who have surpassed Vedic knowledge, one person may be a viṣṇu-bhakta, and he is most famous. Out of many thousands of such Vaiṣṇavas, one who is completely fixed in the service of Lord Kṛṣṇa is most famous. Indeed, a person who is completely devoted to the service of the Lord certainly returns home, back to Godhead."

There is also the following  statement in Śrīmad-Bhāgavatam (3.13.4):

"After much hard labor, a person highly learned in Vedic literature certainly becomes very famous. However, one who is always hearing and chanting the glories of the lotus feet of Mukunda within his heart is certainly superior."

Difference is that in Vṛndāvana they are pure devotees. 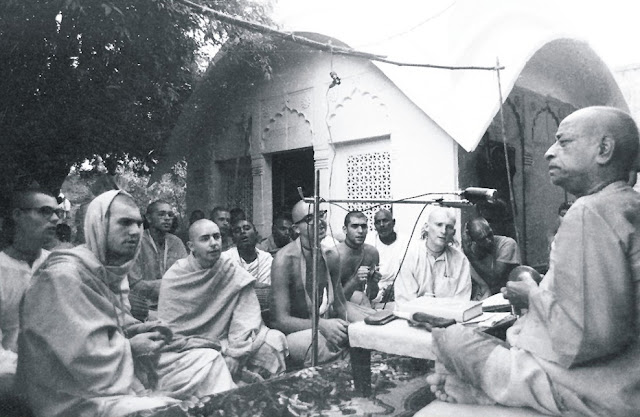 Prabhupāda: The difference is that in Vṛndāvana they are pure devotees. They knew that "Oh, this is not a miracle for Kṛṣṇa. Kṛṣṇa can do anything and everything." So they were not surprised. If I lift one mountain, you will be surprised because you know that "Swamiji is man. How he is lifting?" But they know that Kṛṣṇa is all-powerful. So there was no surprise. It is just like natural work. They were so much affectionate to Kṛṣṇa that... He was not only lifting.

Every day He was doing so much great performances, and His boyfriends, they would come home, and they would narrate the story to their mothers, "Oh, mother, today Kṛṣṇa performed like this. There was a great demon, and He killed him immediately." And the mother will say, "Oh, Kṛṣṇa did that? He is very nice boy, very nice." (laughter) Because they were so affectionate to Kṛṣṇa, they always think, "Everything is possible for Kṛṣṇa. Kṛṣṇa is so nice. Kṛṣṇa is so great." That is their idea. So (indistinct) that is not miracle. That is ordinary thing for Him. Just like Yaśodā. Kṛṣṇa's friends complained, "Mother Yaśodā, Kṛṣṇa has eaten earth. You gave Him sweetmeat, but He was not eating sweetmeat." You know. The boys, they complain each other and again make friends. So Yaśodā was..., "Oh, Kṛṣṇa, I gave You sweetmeats. You are eating earth?" "No, mother. I have not eaten. They are telling false." And they were still, "Yes. We have seen, mother, He has eaten." Then mother asked Him, "Oh, show Your face. Open Your mouth. I want to see." So He opened His mouth, and she saw all the universe within His mouth, not only earth, the whole planets, sun and moon, and everything, within His mouth. Then she thought, "Oh, what I have seen? All right. Don't do it." That's all. (laughter) She is not at all surprised. She thought that "I saw something. Maybe I wrong or right. All right. Don't do it." That's all.

So they were so much affectionate to Kṛṣṇa that Kṛṣṇa's this jugglery could not enchant them. (chuckles) You see? Therefore Kṛṣṇa said to the gopīs that "Your love is so pure that it is not possible for Me to repay." Kṛṣṇa is declaring insolvent to pay their debt. "You be satisfied with your love only. I cannot repay." That is the position of Kṛṣṇa. Kṛṣṇa and the residents of Vṛndāvana so affectionately connected, that there is no such conception that "Kṛṣṇa is God, Kṛṣṇa can play wonderful things." They simply love Kṛṣṇa. And out of love they forget everything. "All right. That's all right. That's all right." So that ecstasy of love is only possible in Vṛndāvana. [break]

Ten Offenses to the Holy Name

There are ten kinds of offenses while chanting the holy name and they should be avoided. These offenses are: 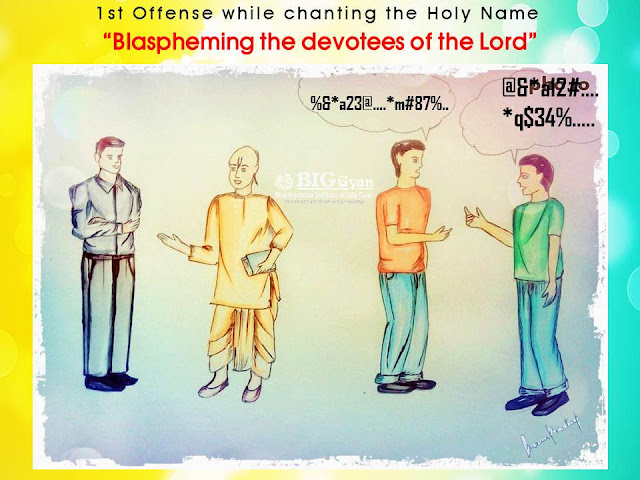 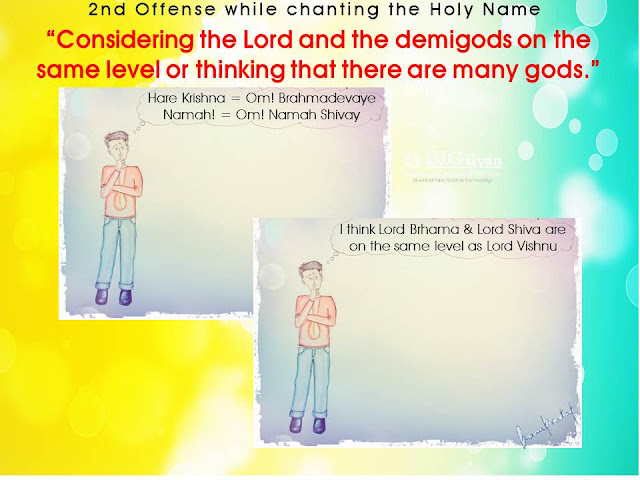 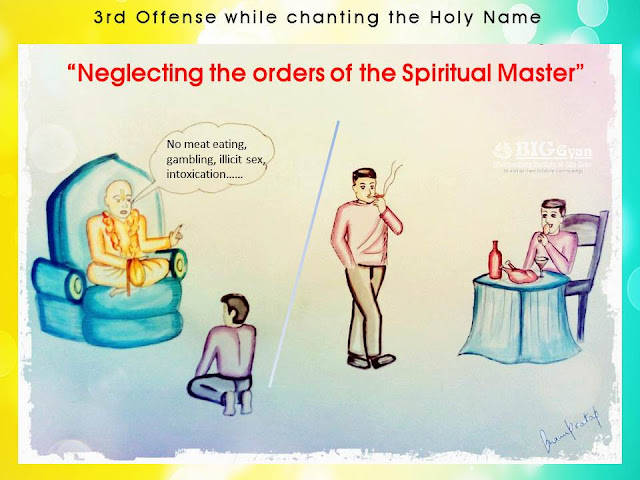 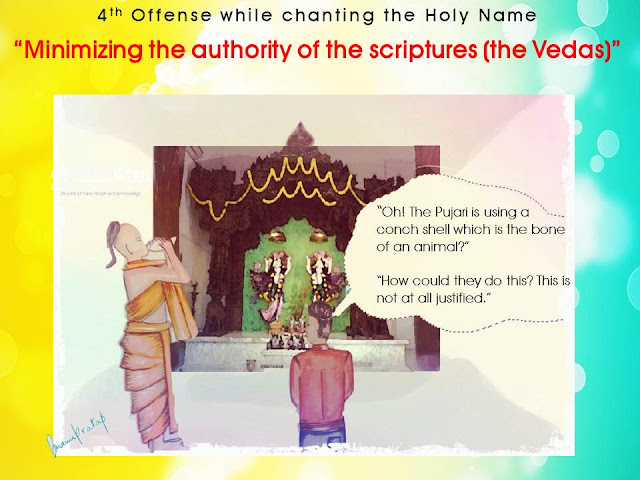 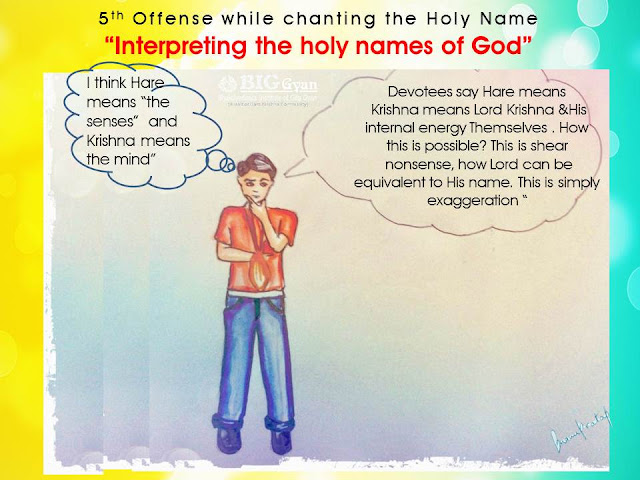 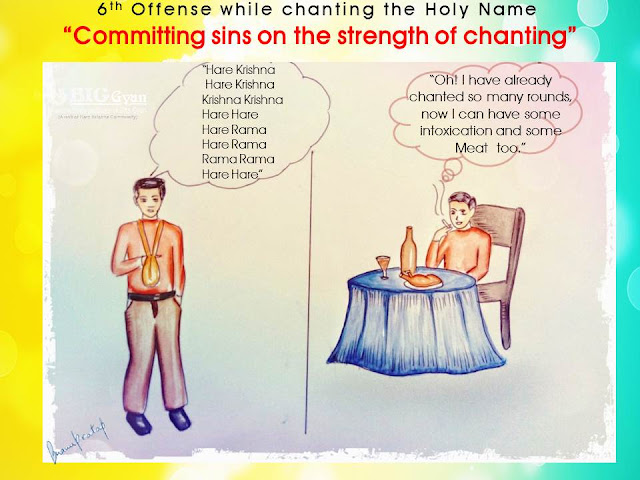 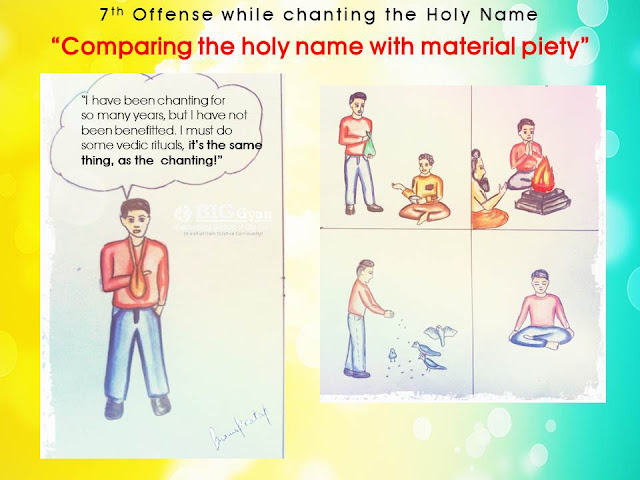 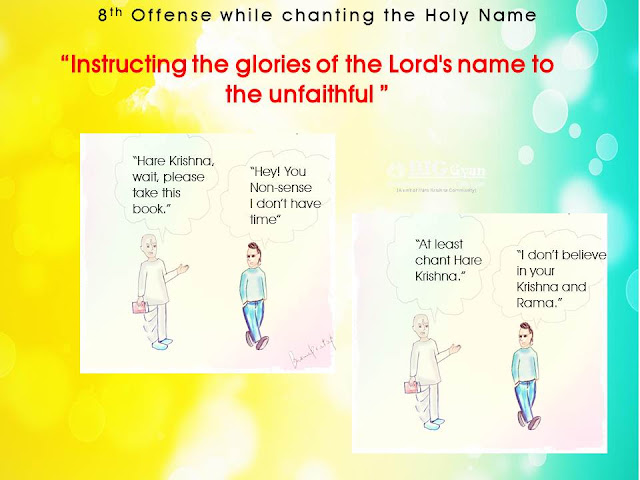 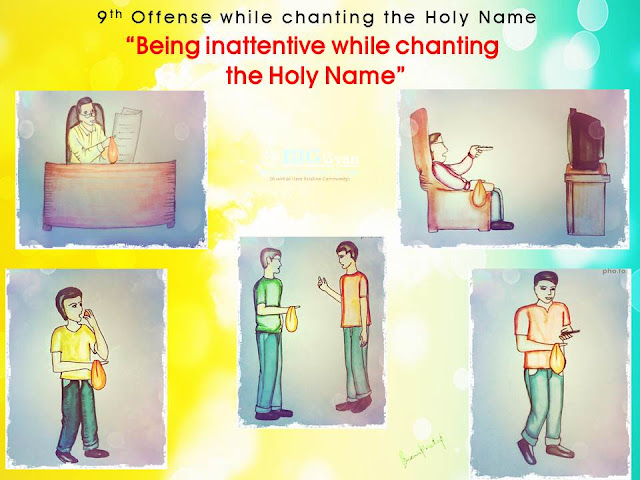 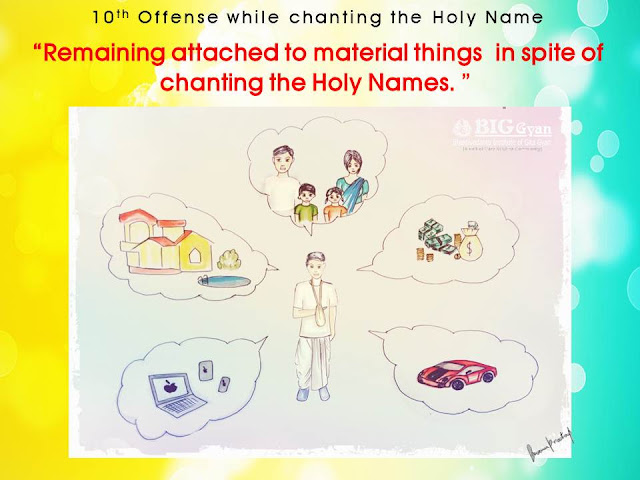 Posted by Hare Krishna Community Jaipur at 11:39 No comments: 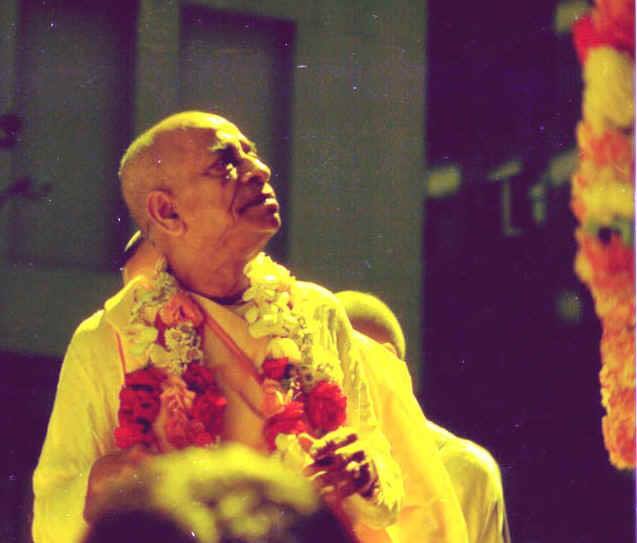 In Vṛndāvana we shall have Ūrja-vrata for one month. You also could observe ūrja-vrata here from the next Ekādaśī, one month. I have already instructed Karandhara to have a sky lamp and put candle in the evening to the Deity for one month.

Posted by Hare Krishna Community Jaipur at 13:34 No comments:

It is good to have such debate

It is good to have such debate, and to know the various arguments which the Mayavad philosophers put forth, and to know how to fully defeat each one. That God can come under Maya is one of their foolish arguments; therefore they say "I am God." This nonsense statement can berefuted in full with our information from Bhagavad Gita, Srimad Bhagavatam. What, then is the definition of God? How can God become a dog? If you are God, why are you suffering, life after life? God means Supreme Controller; can you control anything? Not even your own body. What to speak of the millions of planets spinning so perfectly in their orbit. In this way, we must learn all of us, to defeat these nonsense rascals, and curtail this epidemic of Impersonalism,, which is fatal to the innocent people. We can stop this epidemic with this information of Krishna Consciousness, and it is our duty to do it. 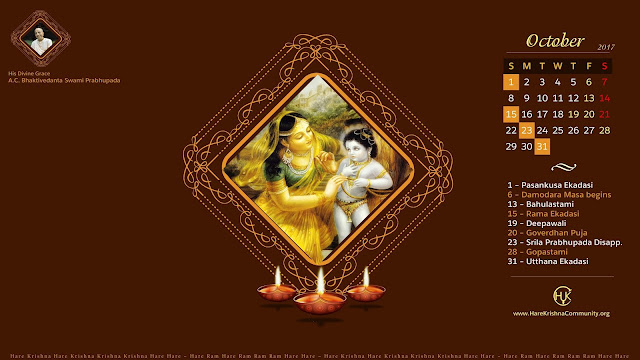