without faith, you cannot make advance. 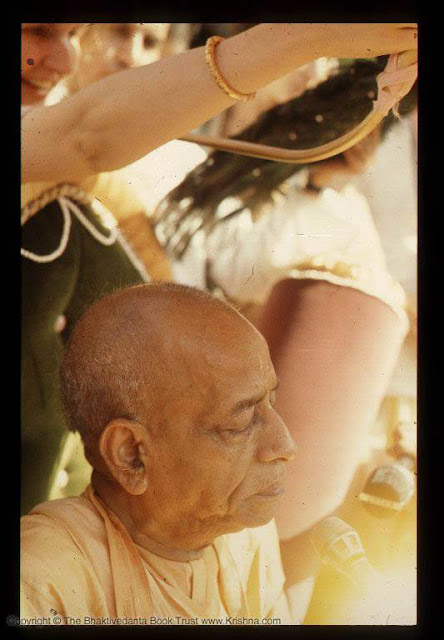 Bahulāśva: Śrīla Prabhupāda, sometimes philosophers make a distinction between knowledge and a belief. They say you can believe in something, but that doesn't mean that you necessarily know that thing which you believe in.
Prabhupāda: Yes, that's fact. Therefore for the neophytes, less intelligent, they should believe. That is the only way, viśvāsa. So generally mass of people they are not so educated. They should believe.
Devotee (6): It says in the Bhāgavatam...
Prabhupāda: Therefore in the Caitanya-caritāmṛta it is said that viśvāsa śabde śudṛdha niścaya. Śudṛdha niścaya, kṛṣṇe bhakti kaile sarva-karma kṛta haya. Śraddhā, śraddhā. Śraddhā means faith. So in Christian science also, there is state, faithful. So this faith may be blind, but that is required.

Paramahaṁsa: Like a child.
Prabhupāda: Yes. Śraddha-śabde viśvāsa. Śraddhā, faith, means believing firmly. That is śraddhā, or faith. There is no question, "Yes." Śraddha-śabde viśvāsa. Therefore we have to believe in the Vedas. Vedas also says like that. That example I give sometimes, that cow dung is stool. In one place it is said stool is impure; in another place it is said cow dung is pure. Now, one may argue, "What is this, contradiction?" But you have to believe it. That is Veda. And that is actually being done. So without faith, you cannot make advance. The skeptics, they have no faith. Therefore they are lost. You must have faith.
Morning Walk —July 21, 1975, San Francisco
Posted by Hare Krishna Community Jaipur at 15:21 No comments:

What is the value of your invention? 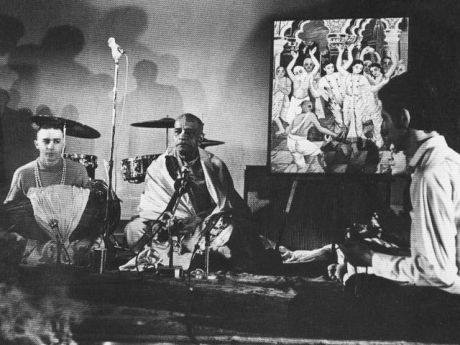 "There are so many they have invented. Just like Hare Kṛṣṇa mantra is prescribed in the śāstras, and they have invented so many. Although there is the name of the Supreme Lord, still you have to follow the śāstra. If you say Rāma Rāma Rāma, RādheRādhe Rādhe, Kṛṣṇa, there are so many mentioned. That is also name, but you have to follow the śāstra. Śāstra says:
Hare Kṛṣṇa Hare Kṛṣṇa Kṛṣṇa Kṛṣṇa Hare Hare
Hare Rāma Hare Rāma Rāma Rāma Hare Hare
You have to take that. Not that you can say, nitāi-gaura rādhe-śyāma, hare kṛṣṇahare rāma, no. Why? Is there any in the śāstra? No, you have invented. What is the value of your invention? You are not perfect. But they like that "It is my guru, I have got some followers, I invent some type of chanting." This is nonsense. You must follow, mahājano yena gataḥ sa panthāḥ [Cc. Madhya 17.186]. You cannot invent. "

www.harekrishnacommunity.org
Posted by Hare Krishna Community Jaipur at 13:26 No comments:

What is this nonsense life? 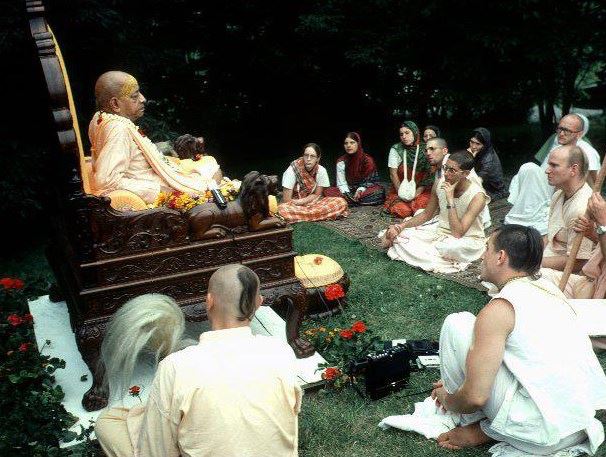 Prabhupāda: That is everywhere. So that village gentleman, that place I liked.
Tamāla Kṛṣṇa: Would you have agreed to stay with him?
Prabhupāda: I would have been glad. Very nice foodstuff, very nice, clean, and he has got his fresh vegetables, like that.
Tamāla Kṛṣṇa: How old were you?
Prabhupāda: At that time I was ten years old. Or twelve years. Not more than twelve years. But I liked that place very much. They still presented the foodstuff, fresh. I have been many... Not many. In the village so tasteful, fresh fruit, fresh vegetables, and they cooked so nicely. Nice milk. Everything very nutritious. That life is gone. What is this nonsense life, hanging in the daily buses, outside. Kṛṣṇa advises to live village life, agriculture, and utilize time for understanding your spiritual life. That is... So we are trying to introduce this, this farm life. [break] 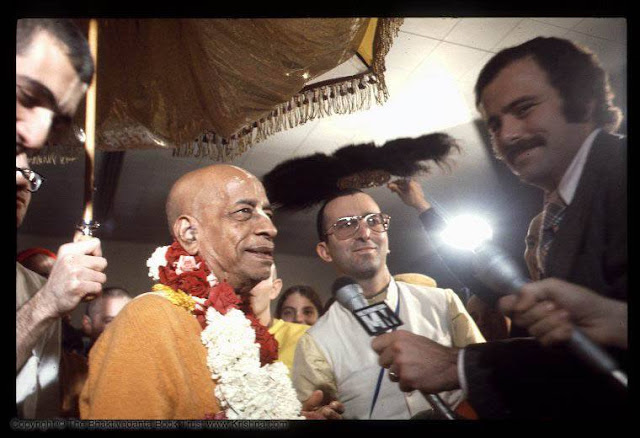 Now take any religion and take their highest conclusion—it is there in Kṛṣṇa consciousness. Take for example Buddhism. They say nonviolence. Oh, we are nonviolent. Christianism, love of God. Oh, we are simply meant for loving God. Mohammedan, servant of God, to render service to the Lord. Oh, we are twenty-four hours engaged in the service of the Lord. Yogis—samādhi, always in samādhi, absorbed in the thought of the Supreme.

We are always absorbed in the thought of Kṛṣṇa. So take any religion, any process, any well. This river, Kṛṣṇa consciousness, will overflood everyone. There cannot be any comparison. What is there? How much water is there in the well? In the river, unlimited. Thousands of wells can be merged into the river. This example is given. Kasmin tu bhagavo vijñāte sarvam idaṁ vijñātaṁ bhavati. If you know Kṛṣṇa, you know everything.

Posted by Hare Krishna Community Jaipur at 13:55 No comments:

"The pure devotees are honored by the names Prabhupāda and Viṣṇupāda" 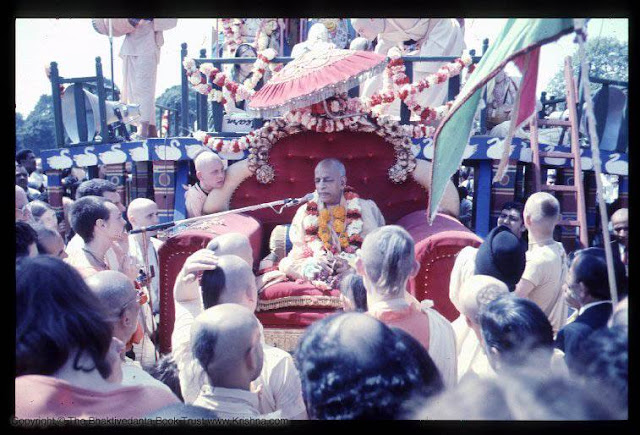 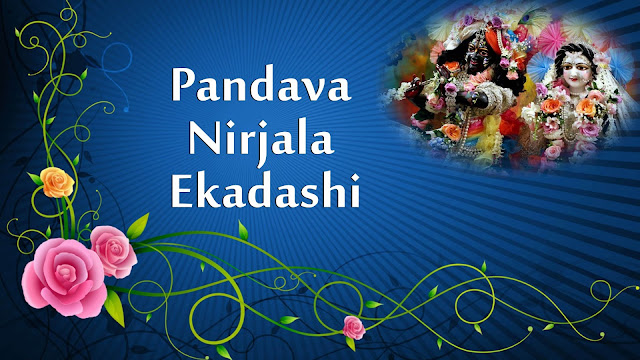 There are following 3 deviations from the original teachings of Srila Prabhupada in a video on Nirjala ekadashi which some devotees are propagating. Just clarifying them so that innocent devotees do not get cheated.

Deviation 1 - Drinking or distributing water on nirjala ekadashi is sin, against the teachings of Sanatana dharma etc. etc.

Answer 1 - With every ekadashi there is a pastime of Lord Krishna which is also indicated by the name that ekadashi also. Just like on Mohini Ekadashi, the pastime of Mohini took place, on Mokshada ekadashi the pastime of Bhagavad Gita being spoken to Arjuna took place. Similarly on Nirjala Ekadashi the pastime that since Bhima was unable to obeserve every ekadashi so Vyasadeva gave him this special concession that he can observe this one ekadashi without taking even water and it will be considered as fasting for all ekadashis. This concesssion was given by Vyasadeva for Bhima,  not for us. For us all ekadashis are same as will be confirmed by Srila Prabhupada later on in this message.  If we want we can do nirjala on any or all ekadashis depending on our capacities.

Deviation 2 - Overstressing on fasting without water without referring to preaching which is not in line with Srila Prabhupada's mood.

Answer 2 - Moreover if somebody can fast and go out for preaching that is very good but out of the other 2 classes of devotees one who is fasting and unable to go out for preaching and one who takes ekadashi prasadam and goes out to preach the second is better. This is applicable for all ekadashis,  not just for nirjala.

Answer 3 - This is nowhere mentioned by Srila Prabhupada and hence unauthorized.

Rāmeśvara: So I've been told that if one fasts on Bhīma-ekādaśī, that it is like fasting on all the ekādaśīs. Is that true?

Prabhupāda: Yes. Ekādaśī is meant for fasting, either Bhīma or Arjuna. But we cannot fast, therefore we have to take little fruits and.... Otherwise, ekādaśī means fasting.

Tamāla Kṛṣṇa: If it is possible, should we go without eating at all?

Prabhupāda: Yes. But don't lie down and sleep.

Mahendra: You said that to Paramahaṁsa Swami once.

Prabhupāda: And you heard from Paramahaṁsa.

Mahendra: No, I was in the room. It was when he was trying to observe Caturmāsya.

Prabhupāda: I never said that.

Mahendra: Oh, okay, I must have heard wrong.

Prabhupāda: If there is service and, on my fasting, service will be stopped, then I can take. First consideration, service. Now if somebody feels weak, he can take mahā-prasāda, render service.

Note the point made by Srila Prabhupada in the above conversation that for us all ekadashis are same.

Tamāla Kṛṣṇa: Minimum on this day. Is that a rule that we should all follow in our temples?

Prabhupāda: We are sixteen rounds.

Prabhupāda: Oh yes. Ekādaśī, simply you should chant. No other business. Nirjala.

Tamāla Kṛṣṇa: No preaching work? Should they go out for preaching?

Prabhupāda: No, those who are preaching, not for them. Those who are sitting idle, or they... (laughter) [break] ...has no other regulation, simply preaching. A preacher is so exalted. He hasn't got to follow any regulation. But don't take it. (laughter) And actually if one is busy in preaching work, that is first-class. [break] ...not my manufactured word, my Guru Mahārāja, that the... That Mādhava Mahārāja, when he was a brahmacārī, his name was Hayagrīva. So he was to go somewhere. So but he was sick. Guru Mahārāja was informed that he was sick and "Today is ekādaśī. He cannot take his regular meals." So Guru Mahārāja said, "No. Let him take immediately meals and go."

Tamāla Kṛṣṇa:  ...Mahārāja would sacrifice everything for preaching.

So everything should be understood in the light of our eternal spiritual master Srila Prabhupada's teaching and not by somebody's mental speculation.
Hare Krishna!
Posted by Hare Krishna Community Jaipur at 12:22 No comments: 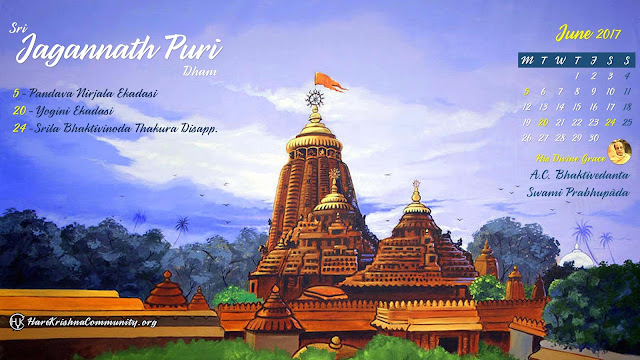