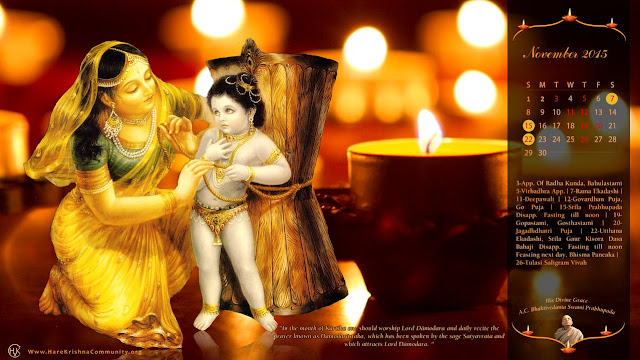 Click to OPEN > Right Click to 'Set As Background' or 'Save Image'
Posted by Hare Krishna Community Jaipur at 17:07 No comments: 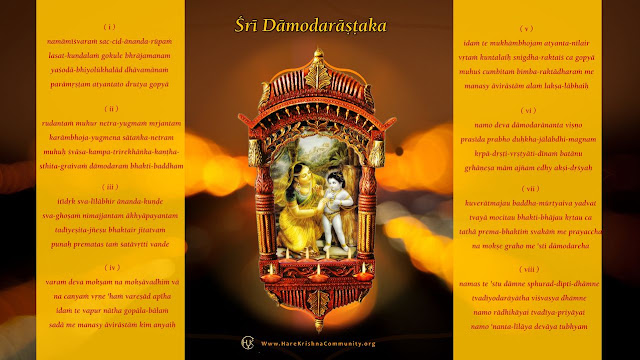 Śrī Dāmodarāṣṭaka (found in the Padma Purāṇa of Kṛṣṇa Dvaipāyana Vyāsa, spoken by Satyavrata Muni in a conversation with Nārada Muni and Śaunaka Ṛṣi)

"In the month of Kārtika one should worship Lord Dāmodara and daily recite the prayer known as Dāmodarāṣṭaka, which has been spoken by the sage Satyavrata and which attracts Lord Dāmodara." (Śrī Hari-bhakti-vilāsa 2.16.198)

1. To the Supreme Lord, whose form is the embodiment of eternal existence, knowledge, and bliss, whose shark-shaped earrings are swinging to and fro, who is beautifully shining in the divine realm of Gokula, who [due to the offense of breaking the pot of yogurt that His mother was churning into butter and then stealing the butter that was kept hanging from a swing] is quickly running from the wooden grinding mortar in fear of mother Yaśodā, but who has been caught from behind by her who ran after Him with greater speed-to that Supreme Lord, Śrī Dāmodara, I offer my humble obeisances.

2. [Seeing the whipping stick in His mother's hand,] He is crying and rubbing His eyes again and again with His two lotus hands. His eyes are filled with fear, and the necklace of pearls around His neck, which is marked with three lines like a conchshell, is shaking because of His quick breathing due to crying. To this Supreme Lord, Śrī Dāmodara, whose belly is bound not with ropes but with His mother's pure love, I offer my humble obeisances.

3. By such childhood pastimes as this He is drowning the inhabitants of Gokula in pools of ecstasy, and is revealing to those devotees who are absorbed in knowledge of His supreme majesty and opulence that He is only conquered by devotees whose pure love is imbued with intimacy and is free from all conceptions of awe and reverence. With great love I again offer my obeisances to Lord Dāmodara hundreds and hundreds of times.

4. Lord, although You are able to give all kinds of benedictions, I do not pray to You for the boon of impersonal liberation, nor the highest liberation of eternal life in Vaikuṇṭha, nor any other boon [which may be obtained by executing the nine processes of bhakti ]. O Lord, I simply wish that this form of Yours as Bāla Gopāla in Vṛndāvana may ever be manifest in my heart, for what is the use to me of any other boon besides this?

5. Lord, Your lotus face, which is encircled by locks of soft black hair tinged with red, is kissed again and again by mother Yaśodā, and Your lips are reddish like the bimba fruit. May this beautiful vision of Your lotus face be ever manifest in my heart. Thousands and thousands of other benedictions are of no use to me.

6. Supreme Godhead, I offer my obeisances unto You. O Dāmodara! O Ananta! O Viṣṇu! O master! O my Lord, be pleased upon me. By showering Your glance of mercy upon me, deliver this poor ignorant fool who is immersed in an ocean of worldly sorrows, and become visible to my eyes.

7. Lord Dāmodara, just as the two sons of Kuvera-Manigrīva and Nalakūvara-were delivered from the curse of Nārada and made into great devotees by You in Your form as a baby tied with rope to a wooden grinding mortar, in the same way, please give to me Your own prema-bhakti. I only long for this and have no desire for any kind of liberation.

Our Glorious Master - Representative of the twelve great authorities 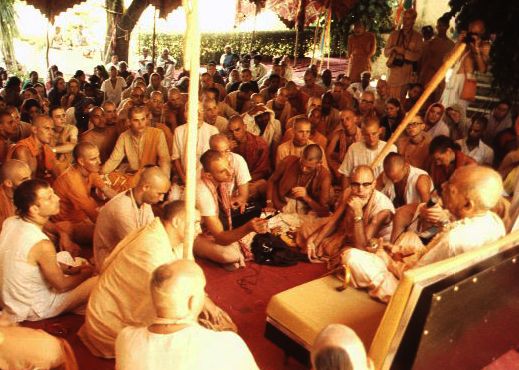 The Absolute Truth, or the Supreme Personality of Godhead, is realized by hearing about Him in all submission and love from a bona fide authority who is a representative of the twelve great authorities mentioned in the Srimad Bhagavatam.
Srimad Bhagavatam 3.5.31
Posted by Hare Krishna Community Jaipur at 14:41 No comments:

The Damodara month is coming, and it will begin on the 18th of this October. So from that day, we'll observe Damodara-vrata for one month. From 18th to 17th November. The duty will be that in the evening you'll offer candle, a small candle, all of you, just before the Deity, not within the room, outside the room, and chant the Damodarastaka, namamisvaram. That is already printed in our song book. So this will be Damodara-vrata. That Damodara is explained here.

64 ways to chant Hare Krishna as instructed by Srila Prabhupada 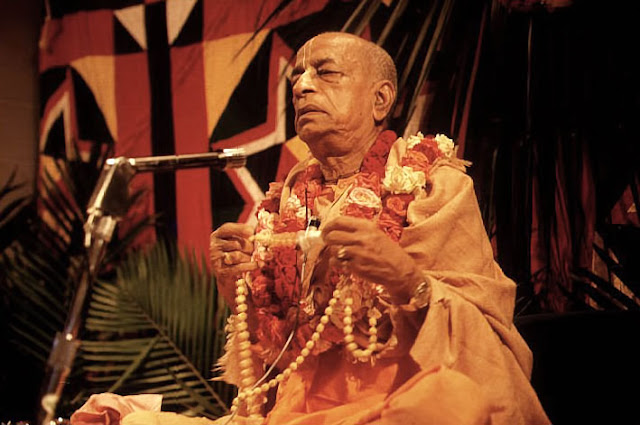 Our Glorious Master - Can drive away all nescience 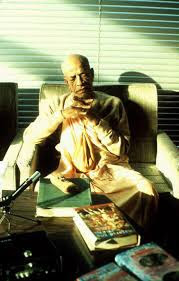 The spiritual master can drive away all nescience as the sun drives away darkness.
Bhagavad Gita 5.16, Purport
Posted by Hare Krishna Community Jaipur at 15:02 No comments:

Our Glorious Master - Detached from the modes of material nature 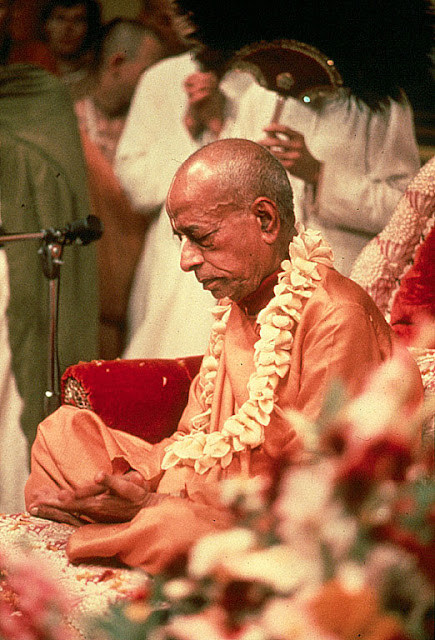 Our Glorious Master-Empowered by the Supreme Personality of Godhead 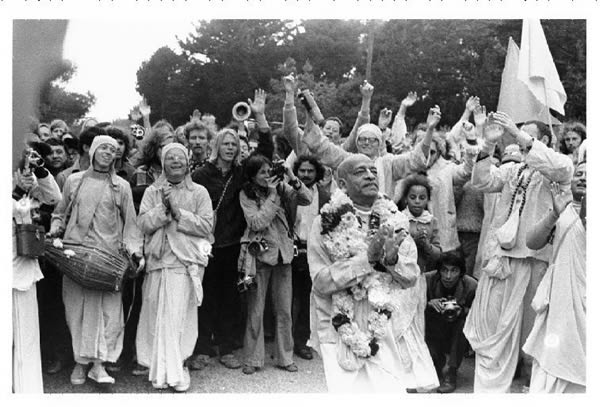 Posted by Hare Krishna Community Jaipur at 13:32 No comments: 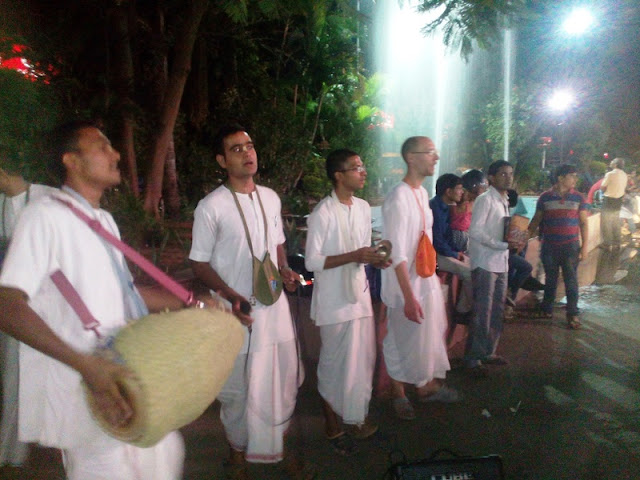 Our Sankirtan party did long sankirtan to make people wait ,watch and
listen us while we were chanting 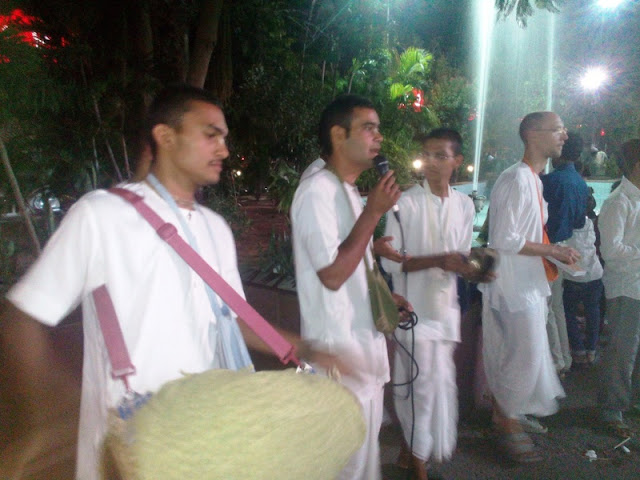 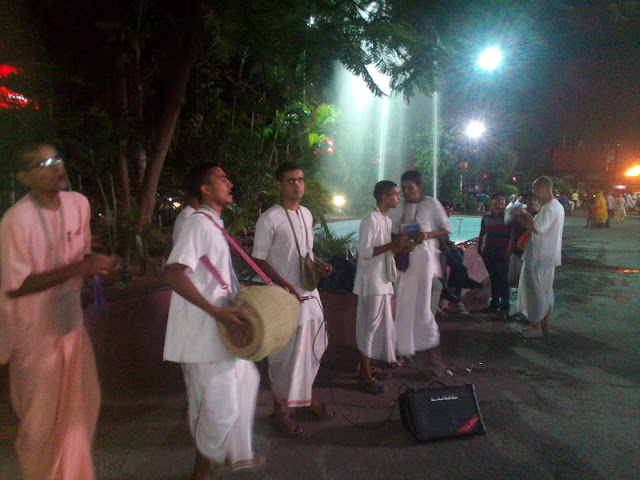 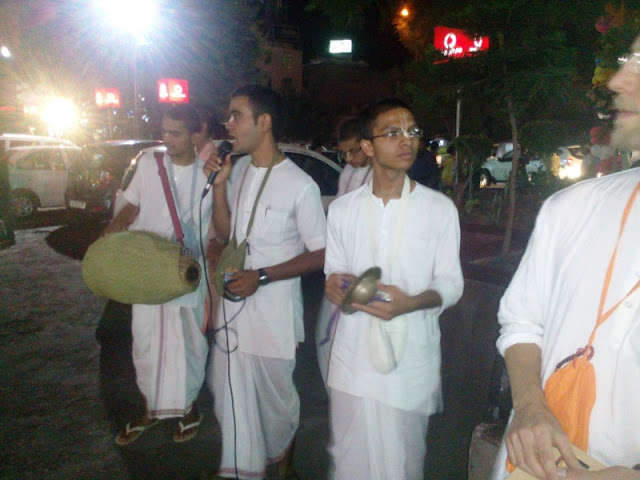 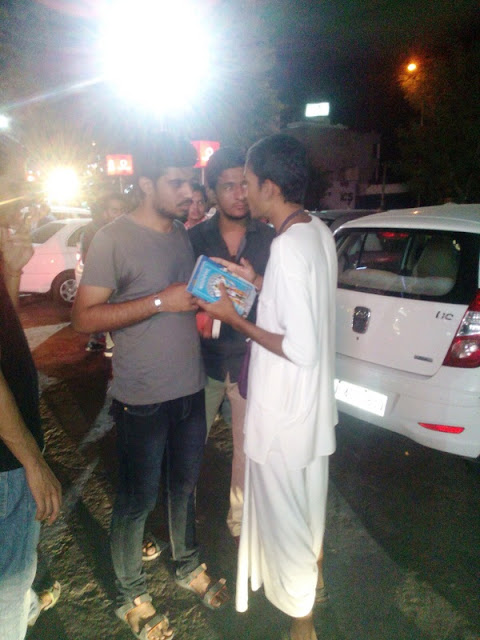 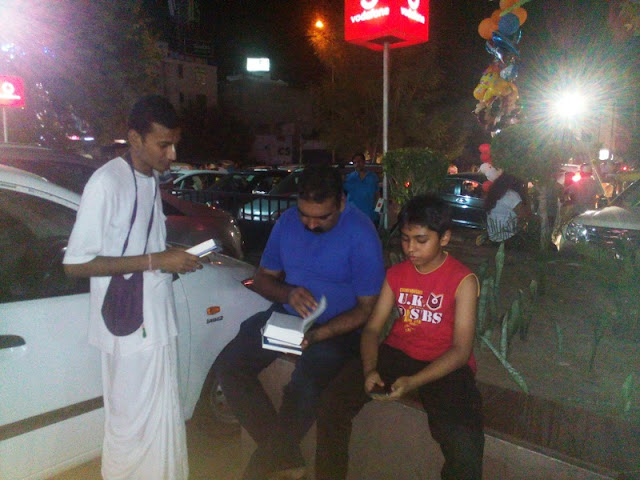 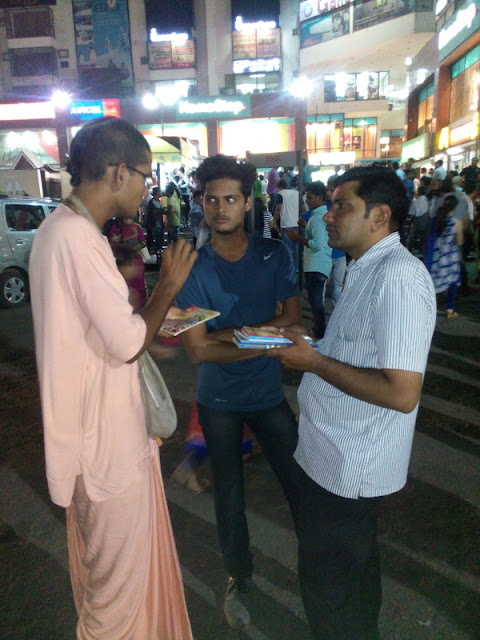 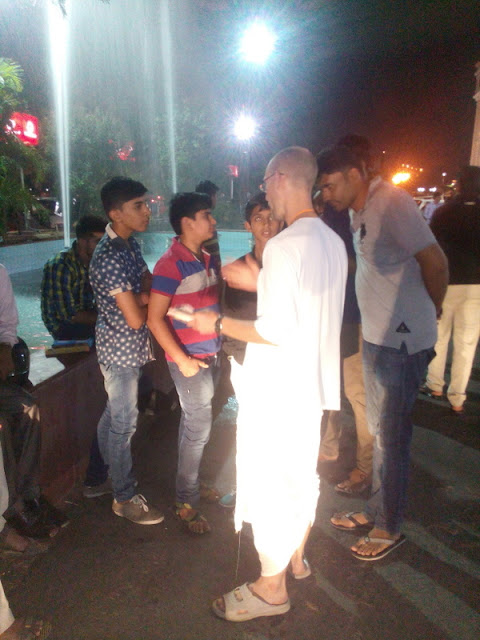 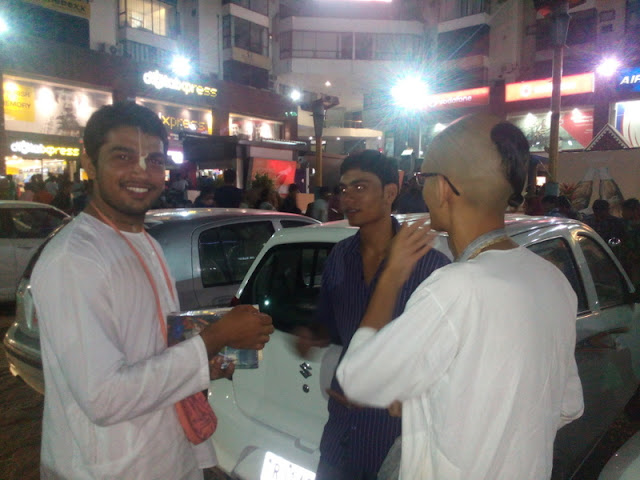 Posted by Hare Krishna Community Jaipur at 12:32 No comments:

With a motive to draw devotees' attention towards a great wish of His Divine Grace A.C. Bhaktivedanta Swami Srila Prabhupada regarding conducting “Bhkati-Shastri” examinations among his disciples and followers and to encourage devotees around the world to study the enormous and great literature written by Srila Prabhupada, Hare Krishna Community, Jaipur is launching a “Bhakti-Shastri” course all around the world. So we invite devotees living in any part of the world to participate in this examination via e-mail.

One has to pass an exam on the following books in order to get Bhakti-Shastri degree as per the instructions given by Srila Prabhupada.

1.Unless one passes bhakti-sastri, he cannot be second initiated

His Divine Grace therefore wishes to institute examinations to be given to all prospective candidates for sannyasa and brahmana initiation. In addition he wishes that all present sannyasis and brahmanas also pass the examination. Awarding of these titles will be based upon the following books:

Bhakti-sastri -Bhagavad-gita, Nectar of Devotion, Nectar of Instruction, Isopanisad, Easy Journey To Other Planets, and all other small paperbacks, as well as Arcana-paddhati (a book to be compiled by NitaiPrabhu based on Hari-bhakti-vilasa on Deity worship)

Bhakti-sarvabhauma - All the above plus the entire Caitanya-caritamrta

Anyone wishing to be initiated as a brahmana will have to pass the Bhaktisastri exam and anyone wishing to take sannyasa will have to pass the Bhaktivaibhava examination as well. This will prevent our Society from degrading to the level of so many other institutions where, in order to maintain the Temple, they accept all third class men as brahmanas. Any sannyasis or brahmanas already initiated who fail to pass the exams will be considered low class or less qualified. Anyone wishing to be 2nd initiated will sit for examination once a year at Mayapur. Answers will be in essay form and authoritative quotations will be given a bigger score. During the exams books may not be consulted.
Letter to: All Governing Body Commissioners  --  Nellore, South India 6 January, 1976

Regarding the examinations, the idea is that anyone, after studying the books, who wants to gain the title of Bhakti-sastri, can take the exam. This is academic. Just like a brahmana with sastric knowledge and a brahmana without. It is optional -- one who wants may take. The real purpose is that our men should not be neglectful of the philosophy. The examinations will begin on GauraPurnima, 1977, not this year, so there is no reason why any of the devotees should give up their normal engagement.
So far your idea for teaching classes, this should be discussed at the GBC meeting. If it does not hamper our normal procedure then it is welcome.
I hope this meets you well.
Letter to: Satsvarupa  --Mayapur 3 February, 1976

Those devotees who wish to take this test online should first of all enroll themselves by sending an enrollment request to the email address hkc.jpr@gmail.com and they will be informed about the upcoming exams and they will be sent the question paper on the day and time scheduled by the examinee devotee. Already the first test on the book "Beyond Birth and Death" has taken place but it is possible for newcomers to take another test on this book on 17th October 2015 along with "Perfection of Yoga".

Posted by Hare Krishna Community Jaipur at 14:23 No comments:

The Lord wants to satisfy His devotee 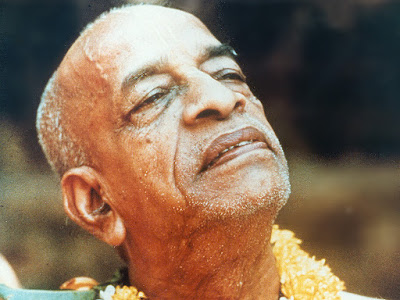 The sadhu... I have explained several times. Sadhu means devotee. Sadhu does not mean the worldly honesty or dishonesty, morality or immorality. It has nothing to do with material activities. It is simply spiritual, sadhu. But sometimes we derive, "sadhu," a person's material goodness, morality. but actually "sadhu" means in the transcendental platform. Those who are engaged in devotional service. Sa gunan samatityaitan [Bg. 14.26]. Sadhu is transcendental to the material qualities. So paritranaya sadhunam. The paritranaya means to deliver.
Now if a sadhu is already delivered, he is on the transcendental platform, then where is the necessity of delivering him? This is the question. Therefore this word is used, vidambanam. It is bewildering. It is contradictory. It appears to be contradictory. If a sadhu is already delivered... Transcendental position means he's no longer under the control of the three material modes of nature, goodness, passion and ignorance. Because it is clearly stated in the Bhagavad-gita: sa gunan samatityaitan [Bg. 14.26]. He transcends the material qualities. A sadhu, devotee, Then where is the question of deliverance? The deliverance... He does not require deliverance, a sadhu, but because he is very much anxious to see the Supreme Lord eye to eye, that is his inner desire, therefore Krsna comes. Not for deliverance. He's already delivered. He's already delivered from the material clutches. But to satisfy him, Krsna is always...
Just like a devotee wants to satisfy the Lord in all respects, similarly more than the devotee, the Lord wants to satisfy the devotee. This is the exchange of loving affairs. Just like in your, in our ordinary dealings also, if you love somebody, you want to satisfy him or her. Similarly, she or he also wants to reciprocate. So if that reciprocation of loving affairs is there in this material world, how much it is greatly elevated in the spiritual world? So there is a verse that: "Sadhu is My heart, and I am also the sadhu's heart." The sadhu is always thinking of Krsna and Krsna is always thinking of His devotee, sadhu.
So the appearance and disappearance of Lord within this material world, that is called cikirsitam.

Posted by Hare Krishna Community Jaipur at 11:29 No comments: