Understand the appearance of Lord Kṛṣṇa in this spirit, as the Kumāras pray to Him 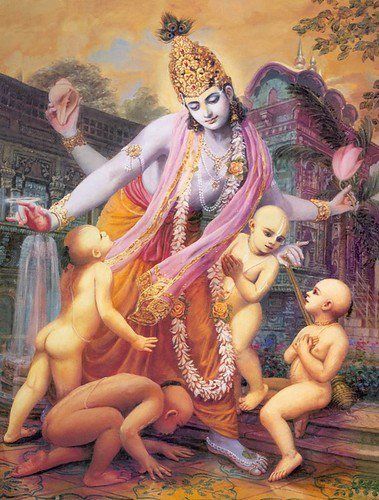 We should try to understand the appearance of Lord Kṛṣṇa in this spirit, as the Kumāras pray to Him. He is eternally a cowherd boy at Vṛndāvana, He is eternally the leader of the Battle of Kurukṣetra, and He is eternally the opulent prince of Dvārakā and the lover of the damsels of Vṛndāvana; all His appearances are meaningful because they show His real characteristics to the conditioned souls, who have forgotten their relationship with the Supreme Lord. He does everything for their benefit. The force exhibited in the Battle of Kurukṣetra by the desire of Kṛṣṇa and through the agency of Arjuna was also necessary because when people become too irreligious, force is required.

Śrīmad-Bhāgavatam 3.16.24
Posted by Hare Krishna Community Jaipur at 15:37 No comments: 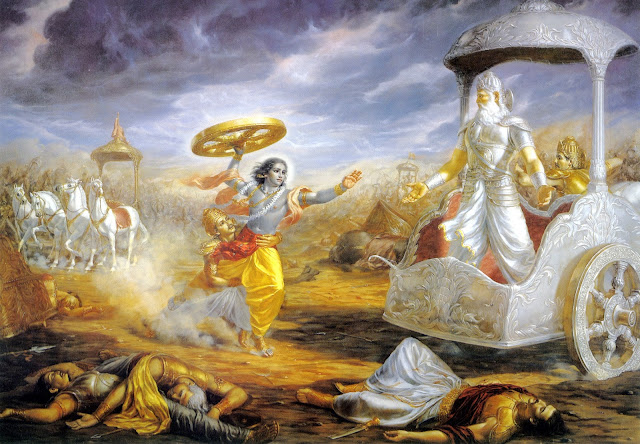 Śrīmad-Bhāgavatam 1.9.39
Posted by Hare Krishna Community Jaipur at 08:07 No comments:

"We make no distinction on the basis of sex. 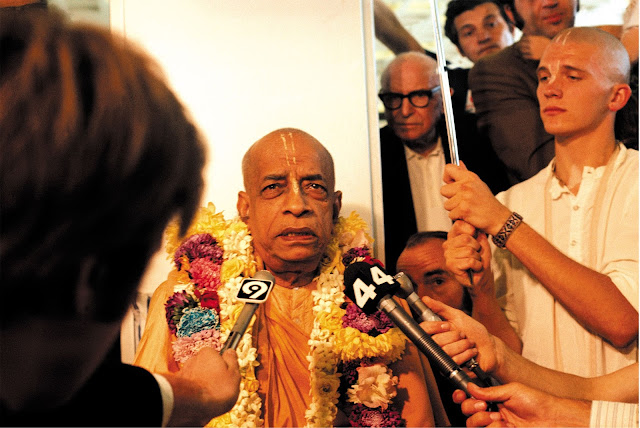 Śrīla Prabhupāda: So-called equal rights for women means that the men cheat the women. Suppose a woman and a man meet, they become lovers, they have sex, the woman becomes pregnant, and the man goes away. The woman has to take charge of the child and beg alms from the government, or else she kills the child by having an abortion. This is the woman's independence. In India, although a woman may be poverty-stricken, she stays under the care of her husband, and he takes responsibility for her. When she becomes pregnant, she is not forced to kill the child or maintain him by begging. So, which is real independence—to remain under the care of the husband or to be enjoyed by everyone?

Ms. Nixon: How about in spiritual life—can women also succeed in Kṛṣṇa consciousness?

Śrīla Prabhupāda: We make no distinction on the basis of sex. We give Kṛṣṇa consciousness to both men and women equally. We welcome women, men, the poor, the rich—everyone. Kṛṣṇa says in the Bhagavad-gītā (5.18):

"The humble sage, by virtue of true knowledge, sees with equal vision a learned and gentle brāhmaṇa, a cow, an elephant, a dog, and a dog-eater."

Science of Self Realization: What is Kṛṣṇa Consciousness?

Posted by Hare Krishna Community Jaipur at 11:25 No comments:

"You are insane. You require treatment" 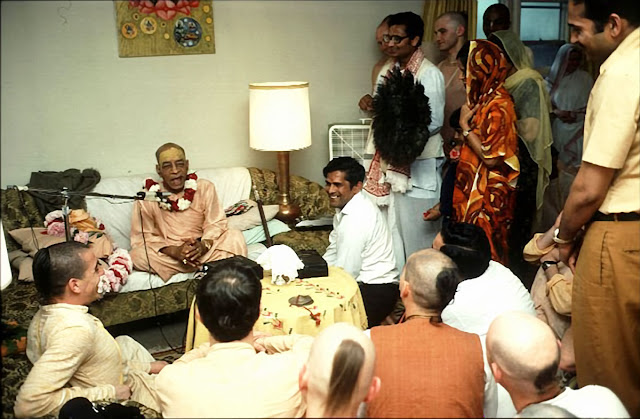 Prabhupāda: No. Even they have no common sense... Just like sarva-dughā, what is called, sarva-kāma-dughā mahī. From earth, so many things are coming. The grass is coming, the tree is coming, and animals, they eat grass, they are coming, the human... Everything is coming. So Kṛṣṇa says that the material nature is the mother, because mother is giving birth. So the child is there, the mother is there, and who is the father? You cannot say that without father, a child can be born, or the mother can independently give birth to any offspring. That is not possible.

So so many living entities are coming from the material nature, and the offsprings are there. Then who is the father? And the father is there. Ahaṁ bīja-pradaḥ pitā [Bg. 14.4]. "I am." So no sane man can deny existence of God. That is not possible. As soon as you deny the existence of God, means you are insane. You require treatment. There is no doubt. This is common sense. So many lives are coming from the earth. Bhūmir āpo 'nalo vāyuḥ [Bg. 7.4].

Either earth, water, air, there is life. They are coming. And the children are there, mother is there. Should we not inquire who is the father? If you say without father they have come, that is foolishness, madness. Immediately, he's mad. So you cannot deny the existence. If you deny, then you are mad. That is the sign of insanity. They require treatment. That is explained in one Bengali poetry.

Posted by Hare Krishna Community Jaipur at 14:09 No comments:

"Man has not created death" 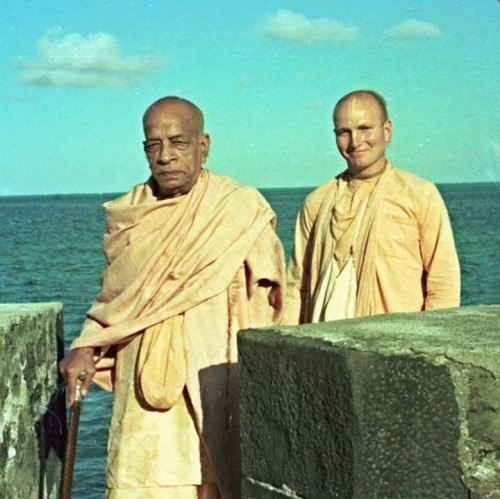 Prabhupāda: No no, no. I accept that man has created anything, everything. But who has created your death?
Puṣṭa-kṛṣṇa: God.
Prabhupāda: Huh? Is there any answer?

Prabhupāda: This is the statement of Mr. Cowper. Man has created nothing. Suppose this building, man has created. But wherefrom the ingredient comes. Has man created? This stone, man has created? Eh? What do you think? Is this stone, creation of man?
Paramahaṁsa: No.
Prabhupāda: Then what... You have done the work of a laborer. That's all. You have taken ingredients from God and worked hard and transformed into a step. That's all. Your creation means just like carpenter creates a furniture. That's all. That is his creation. Then that is... The economic law says that man cannot create anything. He can simply transform. These trees, has man created these trees? Why do they claim man has created everything?

Puṣṭa-kṛṣṇa: But they will say that they made the garden.
Prabhupāda: Eh?
Puṣṭa-kṛṣṇa: They will say that they made a very nice garden.
Prabhupāda: That's all. That is the business of gardener, servant, not creator. That is the business of the servant. Just like I keep a gardener servant, and "Do like this. Do like that." That is not he is creator. It is my money which has created. Therefore it is Kṛṣṇa's, everything. That is Kṛṣṇa consciousness, that you have not created anything. You are servant. You are working, and Kṛṣṇa is giving you your subsistence. That's all. So why don't you accept that you are servant of God instead of claiming that you have created. What you have created? This is our challenge. Am I right or wrong?
Paramahaṁsa: Right.

A devotee has no vision in his life other than Kṛṣṇa. 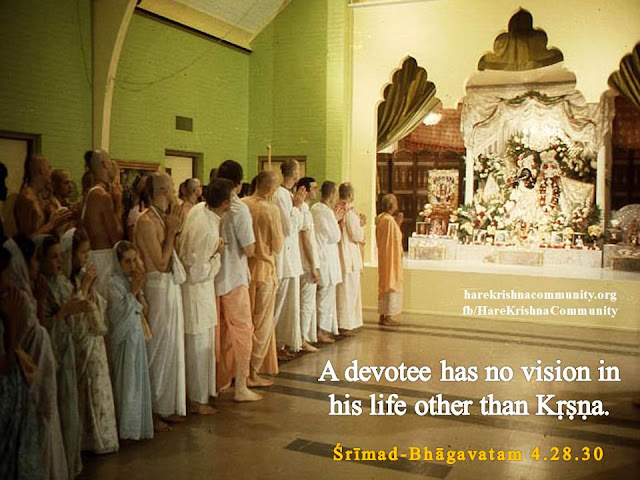 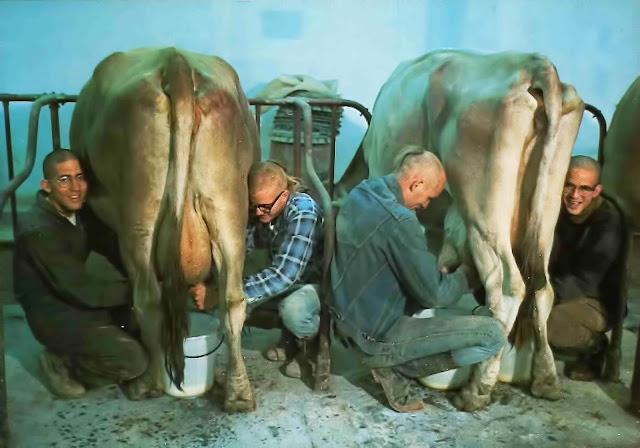 Dr. Patel: I think go-rakṣya must be the backbone of the economy.

Prabhupāda: No, health, brain, everything. Milk is miracle food. And we are practically experiencing in our farms that if the cows are protected nicely, they can supply immense milk. We are getting in our farms, extra milk. Everyone is eating so many preparations, sandeśa, rasagullā, rābrī. They are surprised. In their history they have not eaten all these things.

Posted by Hare Krishna Community Jaipur at 15:21 No comments:

"They descend on different planets as messiahs" 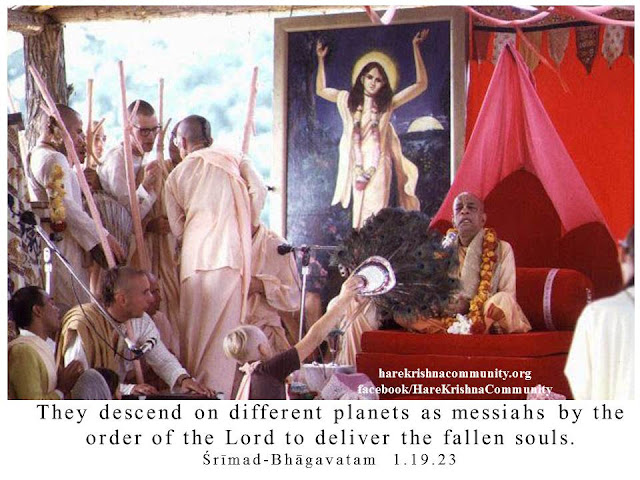 In Satyaloka the inhabitants are fully cognizant of Vedic wisdom, and thus the mystic cloud of material energy is cleared. Therefore they are known as the Vedas personified. Such persons, being fully aware of knowledge both mundane and transcendental, have no interest in either the mundane or transcendental worlds. They are practically desireless devotees. In the mundane world they have nothing to achieve, and in the transcendental world they are full in themselves. Then why do they come to the mundane world? They descend on different planets as messiahs by the order of the Lord to deliver the fallen souls. On the earth they come down and do good to the people of the world in different circumstances under different climatic influences. They have nothing to do in this world save and except reclaim the fallen souls rotting in material existence, deluded by material energy

Posted by Hare Krishna Community Jaipur at 19:03 No comments: