"When I am in some danger, I chant Hare Kṛṣṇa loudly" 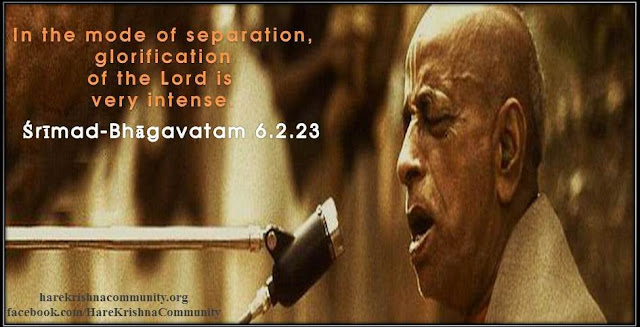 German Devotee (4): I know so many people, young people, that when they see us chanting on the street, I can see their eyes, that they really want to chant also, but something is stopping them. 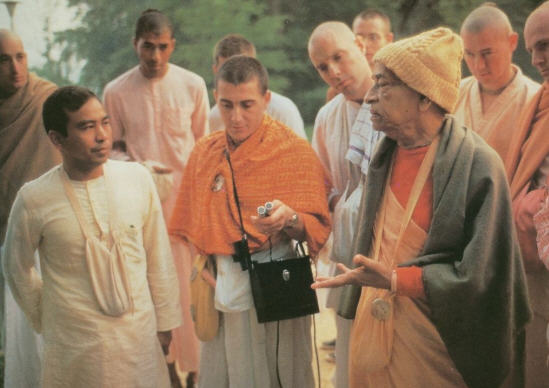 Satsvarūpa: Medicines have done away with so many diseases.
Prabhupāda: What is that? Disease... Does it mean there is no disease? You die by this disease or that disease. What is the improvement?
Gurukṛpā: They say that people used to live much longer, that they live longer now.
Prabhupāda: So what is the use of living longer, a tree is living longer, five thousand years. Does it mean that it is important life? A tree is standing for seven thousand years. There is a tree in San Francisco.
Gurukṛpā: Yes, I saw that.
Prabhupāda: You have.
Hari-śauri: Redwood forest.
Prabhupāda: And from the stoutness and strongness it will live another seven thousand years. Does it...? Is it living, worth living, to stand up very stout and strong in a place for fourteen thousands of years? Is that life? Hm? I have spread this Kṛṣṇa consciousness within ten years, and he is standing eight thousand years. So credit goes to him or to me? Better to live for ten years than to live for ten thousand years in that condition. And therefore they are ass, mūḍha. They do not know what is life. What improvement they have made?
Gurukṛpā: Their only improvement now is abortion and homosex. That is the most popular thing.
Prabhupāda: Tch tch. Just see. 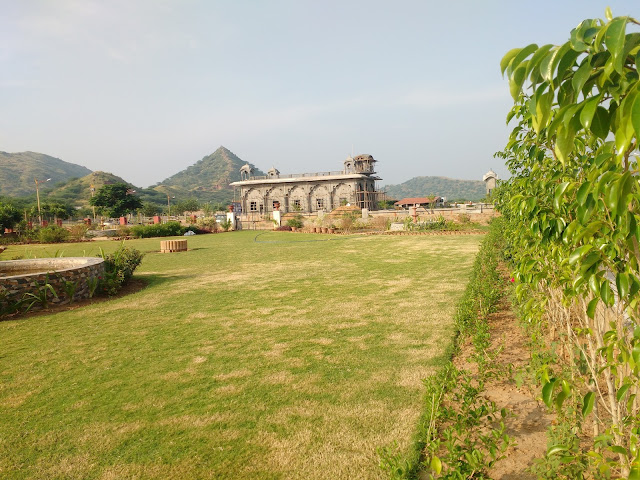 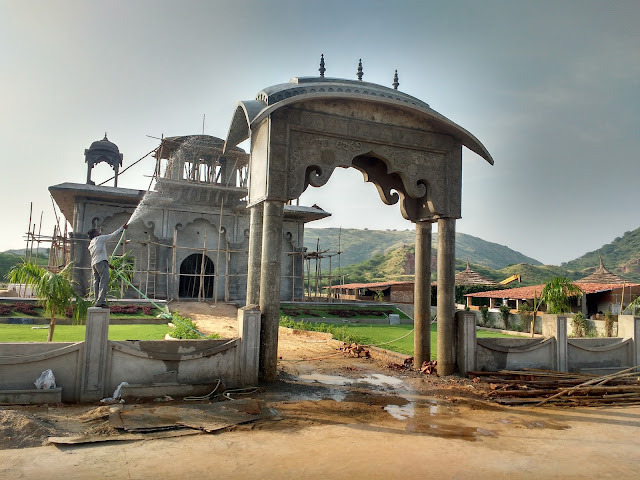 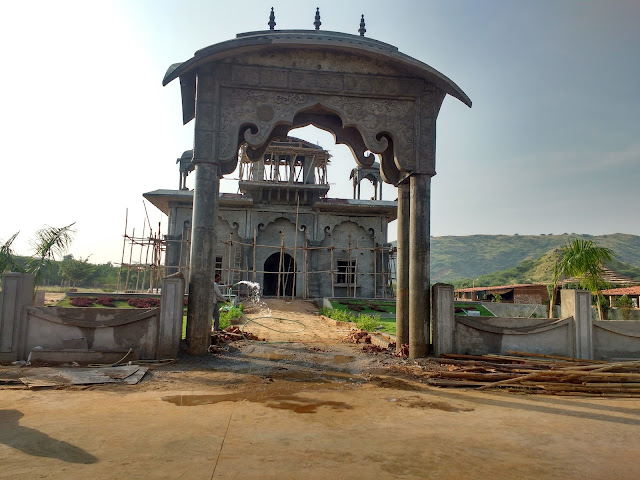 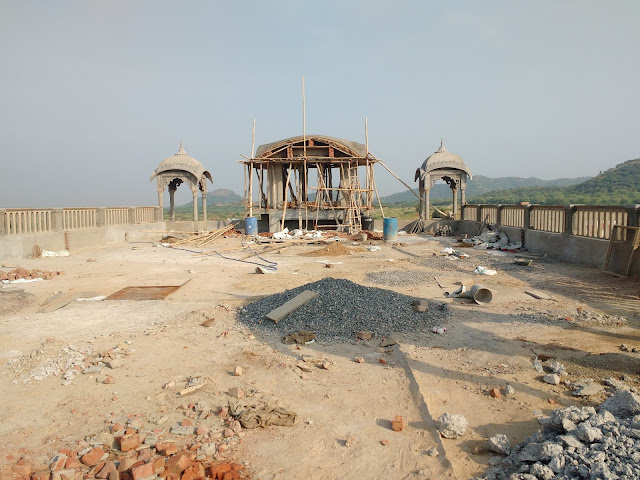 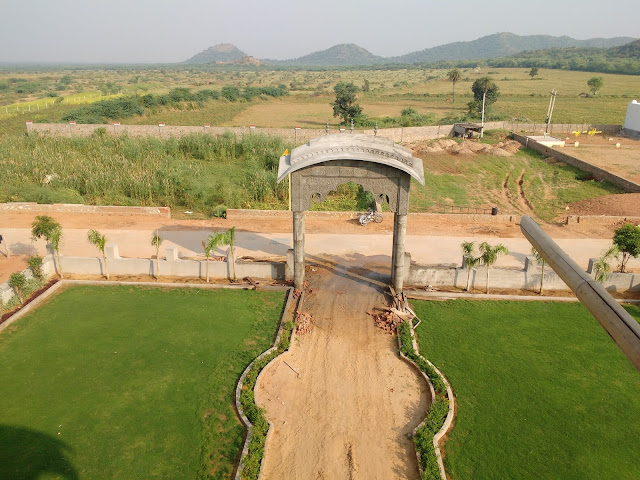 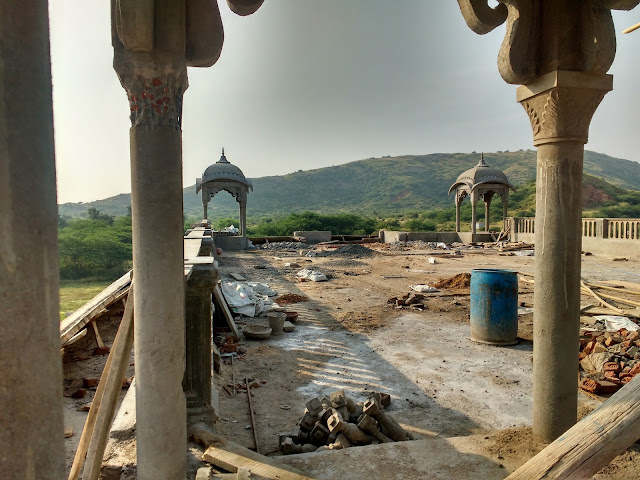 You are big cheaters. 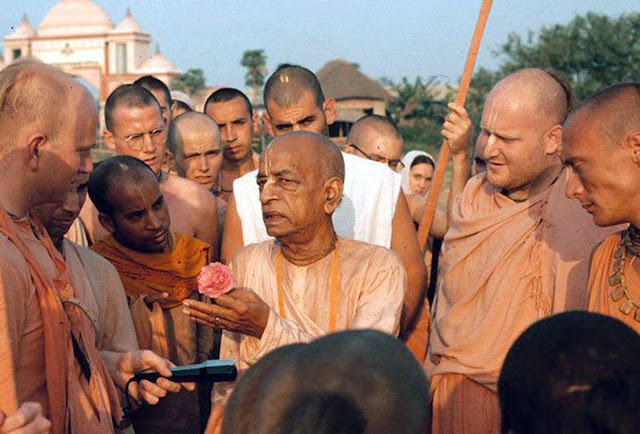 Guru-kṛpā: Māyāpura is the best farm.
Prabhupāda: Yes. And it will be still better when our plan is made.
Guru-kṛpā: We want to set the example this year by also giving a big donation to Māyāpura and also building here.
Prabhupāda: At the same time you see that it is not misspent. That is another defect, that our spending is not very frugal and spend like anything. There must be.... But in India they want to cheat you, and you are very expert, being cheated.
Puṣṭa Kṛṣṇa: It is our karma. (laughter)
Prabhupāda: Not karma. You are working sincerely, that's all.
Guru-kṛpā: We are expert cheaters also. That's how we get the money.
Prabhupāda: Yes. You are big cheaters. You don't cheat two rupees, three rupees. Two millions. (laughs) That is accusation, Alexander and the thief. The thief accused Alexander the Great that "What is the difference between you and me? I am a small thief; you are a big thief. That's all. Why you are punishing me? You are a big thief. You are doing same thing." Then he was let loose. "Yes, what is difference? (laughs) I am a big thief." [break] ...means Alexander the Great, actually he was great. Otherwise he is the emperor, and ordinary thief is accusing him and he said, "Yes, I am thief." He admitted. That is greatness. That is greatness. If he was not great, then he would have hanged him or punished him: "Oh, you are so.... You are accusing me?" But no, he accepted. That is greatness. Mistake is one fault, but to accept that "I have done mistake," that is greatness.

Posted by Hare Krishna Community Jaipur at 12:59 No comments: 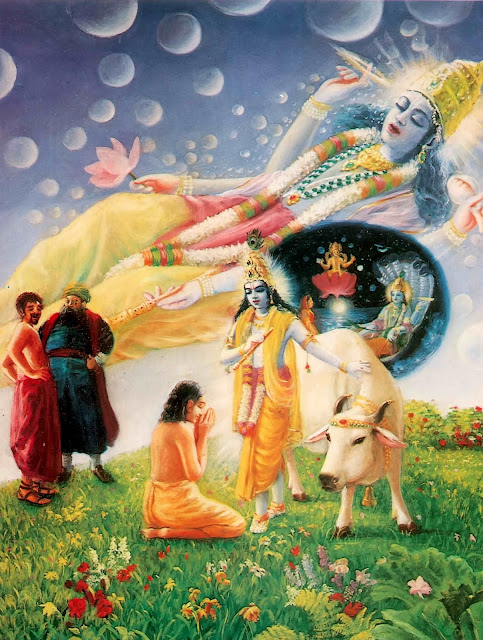 So here it is said that aghavān. Aghavān means sinful. Agha means sin and vān means... Just like Bhagavān. Bhagavān means one who has bhaga, or opulence, or fortune. That is called bhagavat. And just the opposite is called aghavat.
This is Sanskrit language. Bhagavān means the most opulent, topmost place, Bhagavān. And aghavān means lowest place. So here it is said that one has to become aghavān to the stage of Bhagavān. This is Kṛṣṇa consciousness: not to remain aghavān, but to become Bhagavān. Bhagavān, of course, means the Supreme Personality of Godhead.

But those who are very, very advanced, recognized by Bhagavān, they are also sometimes called Bhagavān. Just like Lord Śiva, Lord Brahma, Nārada Muni, on their status, sometimes they are called Bhagavān. Nowadays it has become a fashion to become Bhagavān.
So Bhagavān is not so cheap. Everyone is aghavān. But if he wants to become Bhagavān or in the higher status, higher level, then it is recommended, "Let him take to the devotional service." Vāsudeve bhagavati bhakti-yoga-prayojitaḥ, janayaty āśu vairāgyam. To become Bhagavān, not Bhagavān but on the level, means highest stage, two things required. One thing is jñāna and one thing is vairāgya. Jñāna and vairāgya.

So this is forced meditation: "Hare Kṛṣṇa!" 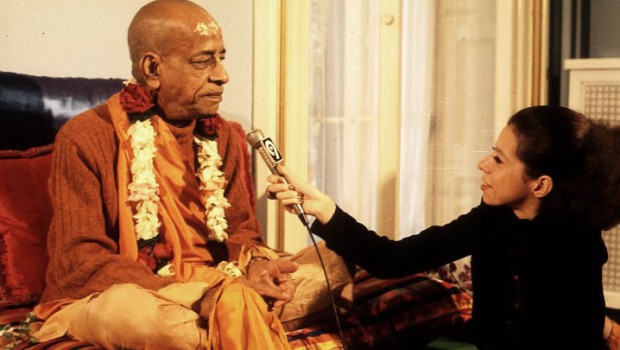 Woman: What about meditating?
Prabhupāda: This is the best medicine, meditation.
Woman: What about the other kind?
Prabhupāda: When meditation, meditation, dhyāna, it is very difficult nowadays. You chant to meditate, you think of your own business. That's another thing. So this is forced meditation: "Hare Kṛṣṇa!" Even if you do not want to hear, you will hear. (laughter) And there is chanting and dancing, everyone who doesn't wanted to hear they also hear.
Woman: What about people who believe in Jesus, God? I mean, what about Christians? It might not have the same effect on them.
Devotee: But Kṛṣṇa is God, and Jesus is teaching exactly what Kṛṣṇa's taught, so there is no difference to a person that has a pure heart. If we chant, all of us who have come to Kṛṣṇa consciousness, we've realized that Jesus Christ's teachings are fulfilled in Kṛṣṇa consciousness.
Woman: Oh, I see.
Devotee: Yes.
Prabhupāda: But Jesus said that he's son of God. So we say Kṛṣṇa is God. So what is the conflict? God must have a son, one or two? So he's also the son. Where is conflict? (everyone laughs). 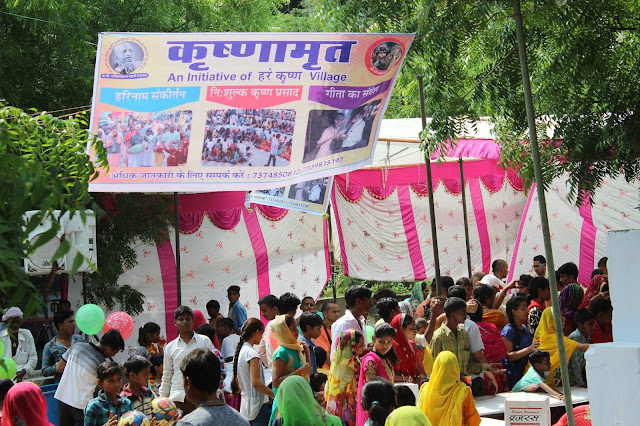 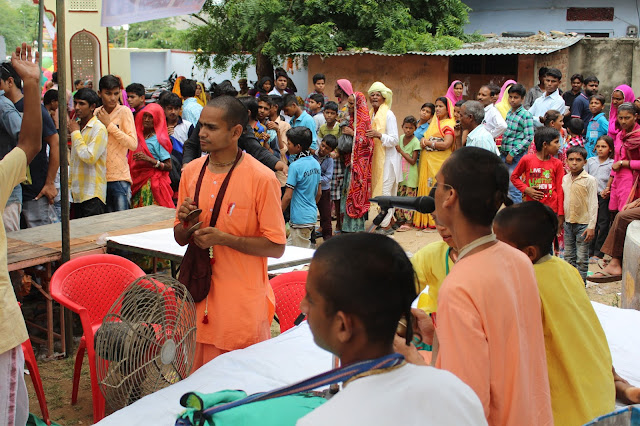 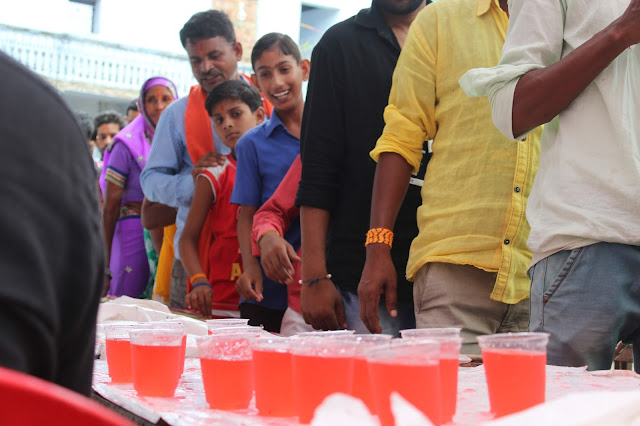 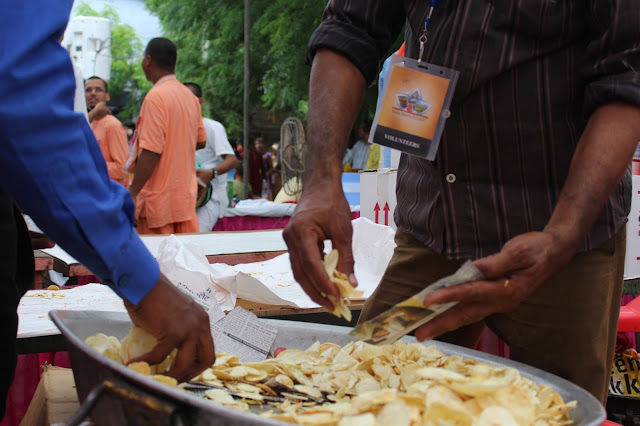 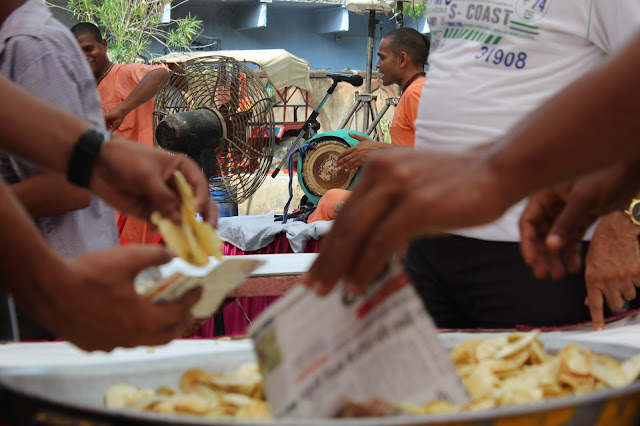 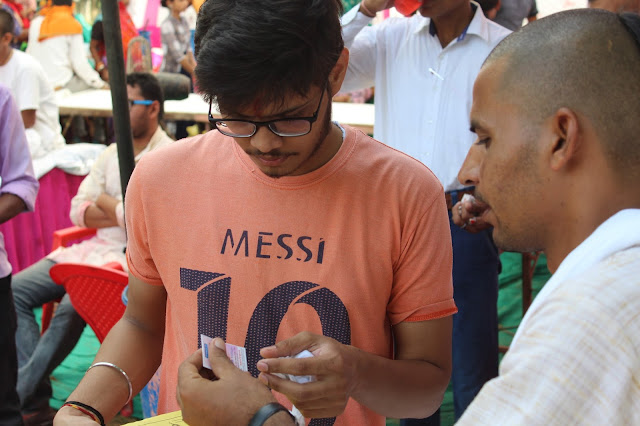 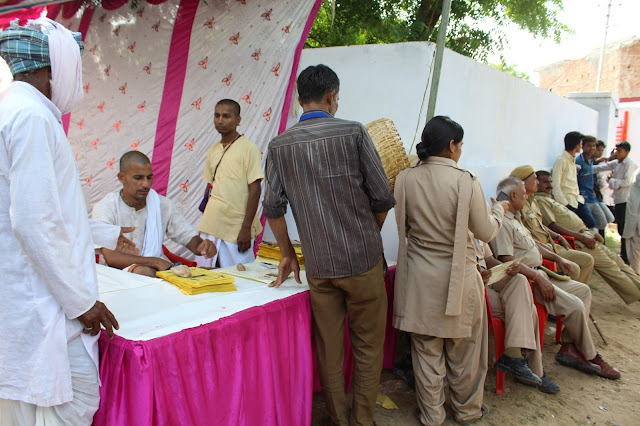 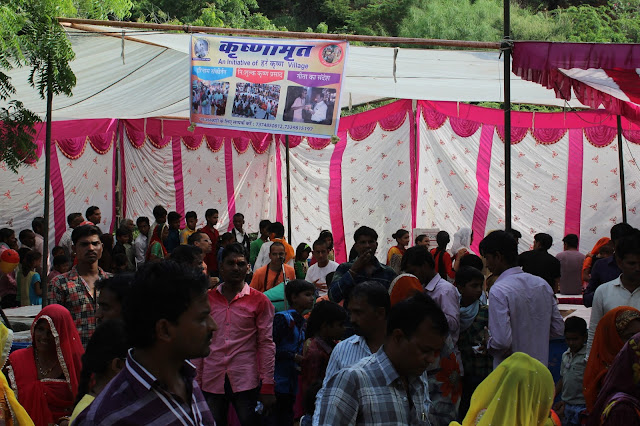 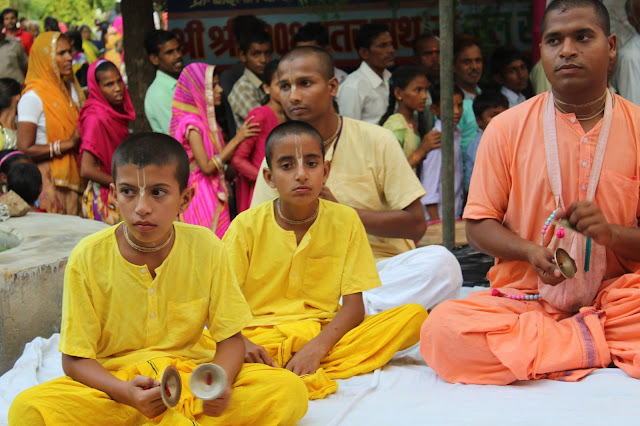 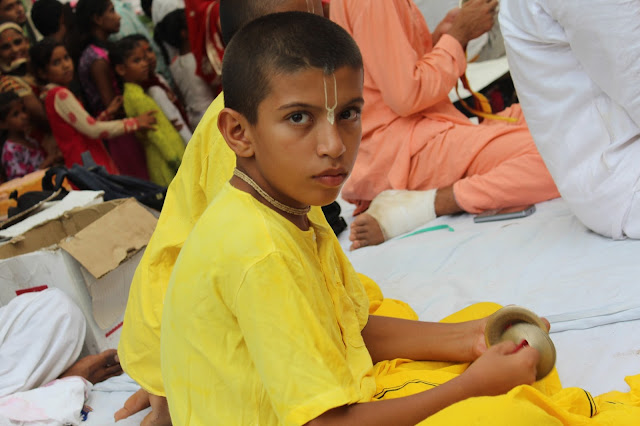 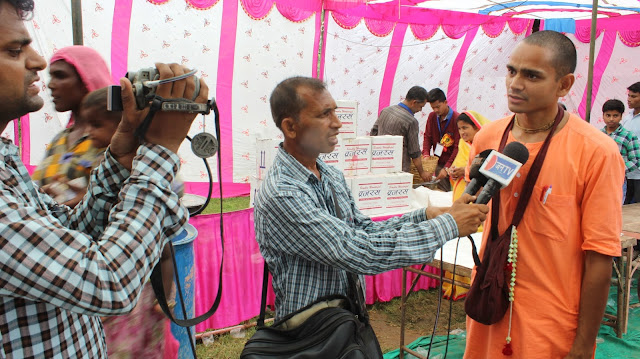 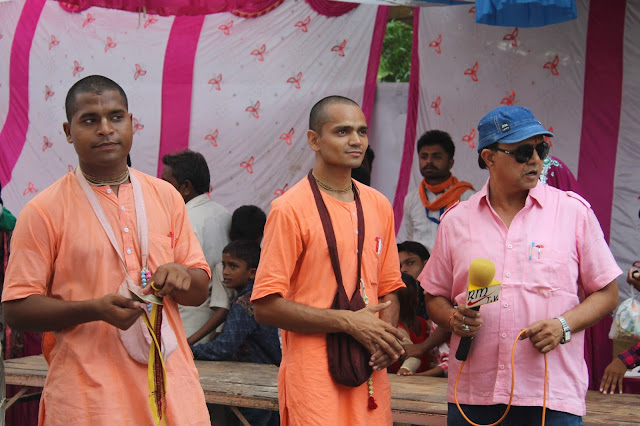 Posted by Hare Krishna Community Jaipur at 14:30 No comments: 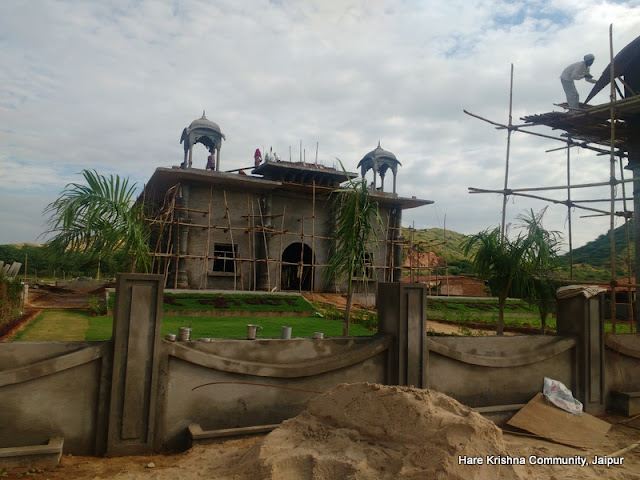 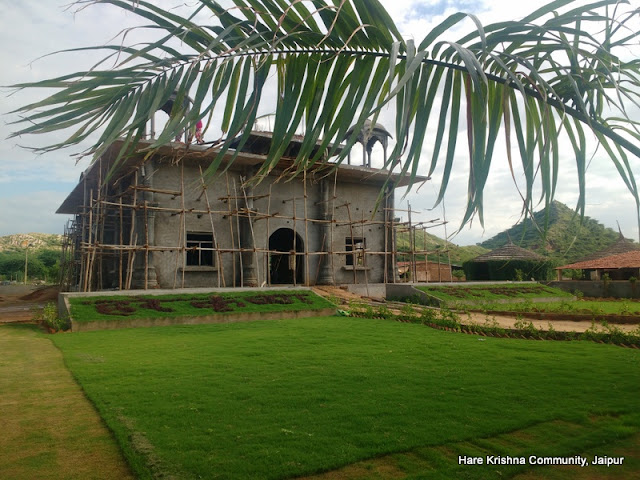 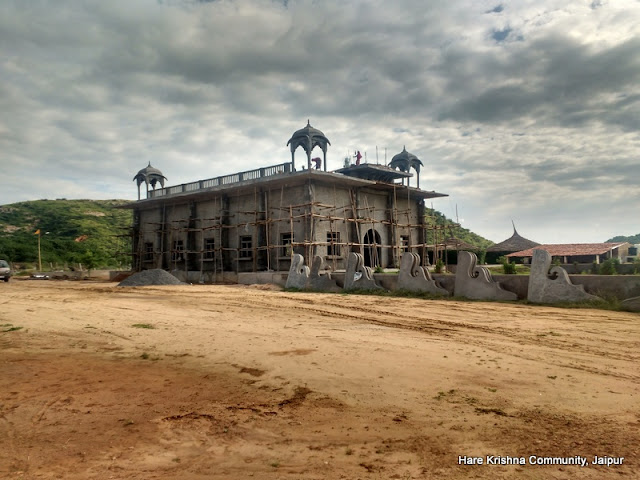 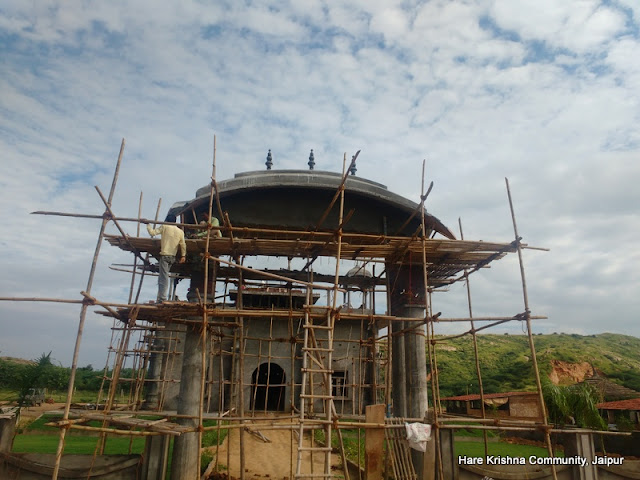 Posted by Hare Krishna Community Jaipur at 10:26 No comments: 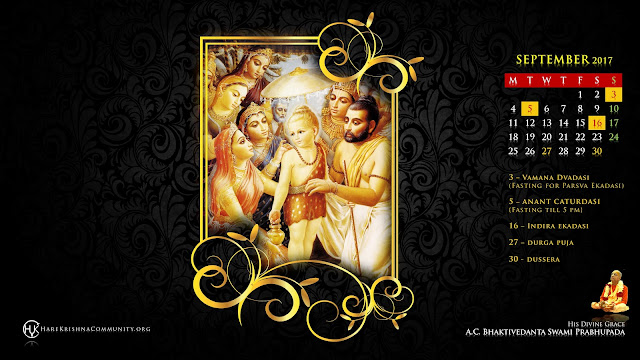