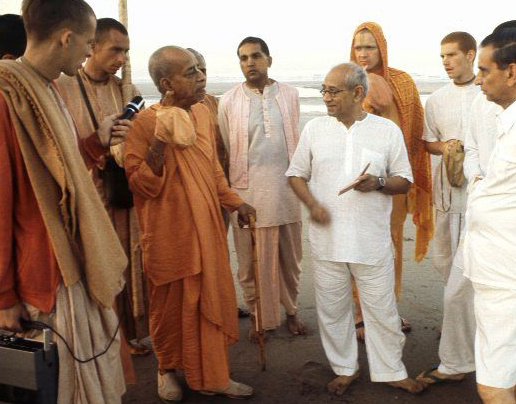 Prabhupāda: No, it... It might be necessity for the time being. Buddhism also was a necessity for the time being. They are not for all. Emergency. Just like it is going on, "emergency." It is not necessity, but sometimes we have to take emergency. Otherwise how Vaiṣṇavas are worshiping Lord Buddha? Eh? Nindasi yajña-vidher ahaha śruti-jatam: "You are always deriding the Vedic principles," śruti-jatam. Sadaya-hṛdaya-darśita-paśu-ghāṭam. This is emergency, that "You have become so much compassionate upon the poor animals because they are unnecessarily being killed." Keśava dhṛta-buddha-śarīra, jaya jagadīśa. He is glorifying, keśava dhṛta-buddha-śarīra, but showing that "You are deriding Vedic principles." So how is that, if one derides Vedic principle, at the same time, jaya jagadīśa hare?

Dr. Patel: Because the Vedic principles were not properly understood by those people at that time.
Prabhupāda: No, no, no. He directly said, "I don't care for the Vedas." Lord Buddha says. So who will worship a person who directly says, "I don't care for your Vedas"? Shall you go to worship a Buddhist or Mohammedan? No. This is emergency. Sadaya-hṛdaya-darśita paśu-ghāṭam. He cannot deride the Vedic principle, but it was necessary at the time. Otherwise these rascals will not stop.