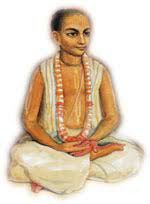 This is a song sung by Narottama dāsa Ṭhākura. He says, "When that day will come, that I shall sing simply Lord Caitanya's name and there will be shivering on my body?" Gaurāṅga bolite habe pulaka-śarīra. Pulaka-śarīra means shivering on the body. When one is factually situated in the transcendental platform, sometimes there are eight kinds of symptoms = crying, talking like a madman, and shivering of the body, dancing without any care for any other men... These symptoms develop automatically. They are not practiced artificially.

So Narottama dāsa Ṭhākura is aspiring for that day, not that one has to artificially imitate. That he does not recommend. He says, "When that day will come, so that simply by uttering the name of Lord Caitanya there will be a shivering on my body?" Gaurāṅga bolite habe pulaka-śarīra. And hari hari bolite: "And as soon as I shall chant 'Hari Hari,' or 'Hare Kṛṣṇa,' there will be pouring down of tears from my eyes." Hari hari bolite nayane ba'be nīra. Nīra means water. Similarly, Caitanya Mahāprabhu also said that "When that day will come?" We should simply aspire. But if, by Kṛṣṇa's grace, that stage we can reach, these symptoms will come automatically. But Narottama dāsa Ṭhākura says that it is not possible to reach that stage without being freed from material affection.

One should not try to understand Rādhā-Kṛṣṇa by his own effort. That will not help him. As these Gosvāmīs, they have given us direction, just like Bhakti-rasāmṛta-sindhu, so one has to follow step after step how to make progress. Then there will be a fortunate day when we shall be able to understand what is the pastimes or loving affairs between Rādhā and Kṛṣṇa. Otherwise, if we take it as ordinary boy and girls reciprocating their loving feelings, then we will misunderstand. Then there will be the production of prakṛta-sahajiyā, victims of Vṛndāvana.

So Narottama dāsa Ṭhākura is giving us the direction, how one can reach the highest perfectional stage of associating with Rādhā and Kṛṣṇa. The first thing is that one should be very much attached to Śrī Caitanya Mahāprabhu. That will lead us. Because He came to deliver the understanding of Kṛṣṇa consciousness, therefore one should first of all surrender to Śrī Caitanya Mahāprabhu.

By surrendering to Śrī Caitanya Mahāprabhu, Nityānanda Prabhu will be pleased, and by His pleasing, we shall be freed from material desires. And when material desires are no more, then we shall be able to enter Vṛndāvana. And after entering Vṛndāvana, when we are eager to serve the Six Gosvāmīs, then we can reach the platform to understand the pastimes of Rādhā and Kṛṣṇa. Yes. [end]

Posted by Hare Krishna Community Jaipur at 21:13 No comments: 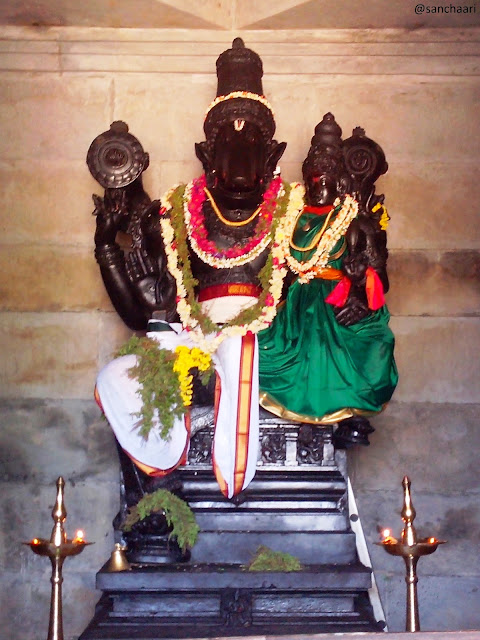 This temple is said to be more than 2500 years old. This region is said to be a ‘punyakshetra’ or a holy region where the great sage Gautam performed penance. It was the maharishi who worshipped the saligrama here. Many years later, according to legend, king Veera Ballala got lost in these forests during one of his hunting trips. When he was resting under the shade of a huge tree he saw a hunting dog chasing a rabbit. When they reached a particular spot, the rabbit turned back and started to chase the ferocious dog. Noticing this strange turn of events, the king was convinced of some unseen powers in that place.

He dug up the whole area and found the deity of Pralaya Varahaswamy hidden under the layers of earth. The king then installed it in the temple and offered regular prayers. The temple that we see today is the remains of what the king had built. It has weathered severe floods and stood to tell the tale. Even today, right in front of the temple is the stone slab with Devanagiri inscriptions on it, telling us the story of the place.

It was undiscovered and unprotected until a few years back. It must be either a divine intervention or that we Indians have started tracing back our rich heritage and culture that has bought this temple to its present light and glory.

The temple has survived several floods. The temple is built in a rectangular shape using grey stones and looks plain from outside, but the deity inside is breathtaking. The temple is divided into two portions: garba griha / sanctum sanctorum and a outer hall.

THE PRESIDING DEITY IS BHOO VARAHASWAMY, WHO IS LORD VISHNU’S THIRD AVATAR / INCARNATION

It is also known as Pralaya Varaha Swami and Adi Varaha Mahishi. In this avatar Lord Vishnu appeared as a boar to rescue Goddess Bhoodevi / Mother Earth from the demon Hiranyaksha.

Posted by Hare Krishna Community Jaipur at 18:35 No comments: 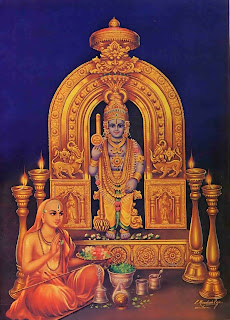 Knowledge of Lord Krishna is a treasure that has come down through the ages—down through an unbroken chain of teachers and disciples that reaches back to Lord Krishna Himself. In this, the first in a series of articles on great Krishna-conscious teachers, we will look at one of the greatest of all—Madhvacarya.

Madhvacarya (acarya means “one who teaches by his life”) lived in thirteenth-century India and appeared in the Brahma-Gaudiya Vaisnava-sampradaya—the disciplic chain now represented by His Divine Grace A.C. Bhaktivedanta Swami Prabhupada. In this long disciplic chain of pure teachers, Madhvacarya is a most important link.

As Lord Krishna stresses in the Bhagavad-gita, the essence of all Vedic knowledge is that God is a person: “By all the Vedas I am to be known.” But the spread of the Buddhist doctrine of ultimate voidness eclipsed this knowledge for a time, until the great teacher Sankara (A.D. 788-820) drove Buddhism out of India. Instead of saying “All is nothing,” Sankara said “All is one.” In other words, he upheld an all-pervasive spiritual reality, but said it was ultimately impersonal. Madhvacarya (and other Krishna-conscious spiritual masters like Ramanuja) soundly defeated this impersonalist view and at last reestablished that the Absolute Truth is Krishna, the Supreme Personality of Godhead.

Madhvacarya took his birth in a brahmana (priestly) family at Udupi, a South Indian town on the Arabian Sea. There are some amazing stories surrounding Madhva’s early life. It is said that his father piled up many debts and that to pay them off, Madhva converted tamarind seeds into coins. It is also said that near Madhva’s house a demon named Maniman lived in the form of a snake. Madhva killed him with the big toe of his left foot. We are further told that whenever Madhva’s mother was feeling anxious, he would come before her in one jump—from wherever he happened to be playing.

Even as a young boy Madhva was renowned as a scholar. When he was only five he received spiritual initiation, and when he was twelve he accepted sannyasa, the most renounced order of spiritual life. At that tender age Madhva gave up all family ties to travel the length and breadth of India in quest of spiritual knowledge.

In the course of his travels Madhva visited Badarikasrama, a place of pilgrimage high in the Himalayas. There he met the great sage Srila Vyasadeva—Lord Krishna’s literary incarnation and the author of the Vedic literatures. By studying under Srila Vyasadeva, Madhva grew even greater in his scholarship.

After coming down from the Himalayas, Madhva at last returned to his birthplace, Udupi. Once, when he was sitting at the seashore and meditating on Lord Krishna, Madhva saw a huge merchant ship in danger and signaled the crew safely to shore. Since the boat’s owners wanted to reward him, Madhva agreed to accept a chunk of gopi-candana, clay from Krishna’s land of Vrndavana. As the crew members were bringing the big chunk before him, it broke apart and revealed a Deity form of Lord Krishna, with a stick in one hand and a lump of food in the other. At that moment Madhva composed a beautiful prayer to express his gratitude. Although the Deity was so heavy that not even thirty ordinary people could lift Him, Madhva carried Him back into town all alone. The people of Udupi still worship that Krishna Deity in the way Madhva established. 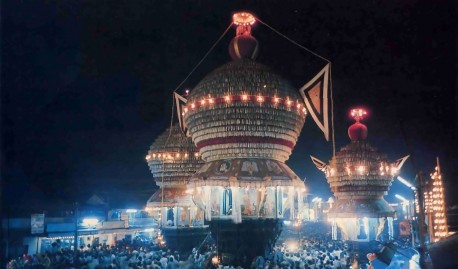 Each year the people of Udupi, Madhvacharya’s birth-place, take the Deity out in a beautiful procession featuring huge carts. 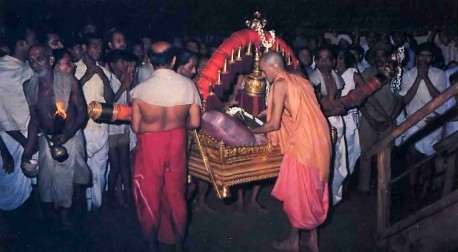 The priest attendant carries the Deity from the temple to the palanquin that will take Him to His waiting car.

Madhva showed his overwhelming physical and spiritual strength on still other occasions. While he was walking on the road a band of thugs attacked him, but he killed them all. Another time a tiger attacked Madhva’s companion Satya Tirtha, but Madhva pulled the fierce animal off with his bare hands. People began to say his strength had no limit.

Madhvacarya’s learning and devotion to Krishna were famous throughout India. His life’s mission was to defeat the views of the impersonalist philosophers. They say that God’s form is simply illusion (maya), and thus they are called Mayavadis. “Even if God was a person in the beginning,” these people say, “He has distributed Himself throughout the creation and thus lost His individual identity.” Madhvacarya smashed this monistic (“all-is-one”) idea with the philosophy of suddha-dvaita—pure dualism. He proved logically that God is always a person and is always distinct from His creation. As anyone can see, the sun is producing volumes of energy but remains the same sun. Similarly, a tree may produce many fruits, but it remains the same tree. Likewise, Lord Krishna produces the material world, but He Himself remains separate from it—He remains the Supreme Personality of Godhead. Here is the real teaching of the Vedas. Thus, Madhvacarya ‘s teaching is called tattva-vada—tattva means “truth,” and vada means “philosophy.”

The Mayavadis go on to say that the soul’s unique and individual identity is also an illusion—that in the end the soul will merge into an impersonal light. But Madhvacarya taught that the soul is actually the eternal servant of Krishna and that by practicing bhakti-yoga—devotional service—each of us can return to our original position in the spiritual world. Madhvacarya especially emphasized that even after the individual soul returns to the spiritual world, he and the Supreme Soul, Krishna, retain their separate identities. They do not become “one.”

In many ways Madhvacarya set the stage for the Krishna consciousness movement. For instance, he stressed the chanting of the holy names of Krishna. Commenting on the Mundaka Upanisad, he wrote that in the present age one can satisfy and worship Krishna, the Supreme Personality of Godhead, simply by chanting His holy names. Madhvacarya also wrote, “There are many lands, fields, mountains, and oceans throughout the creation, and everywhere the Supreme Personality of Godhead is worshiped by the chanting of His different names.”

Specifically, Madhva prepared the way for Lord Caitanya, who appeared two centuries later in the same line of spiritual masters. Lord Caitanya is the incarnation of Krishna who spread the chanting of the Hare Krishna mantra throughout India and ordered His followers to spread it to every town and village in the world. To fulfill this order, His Divine Grace A.C. Bhaktivedanta Swami Prabhupada came to America in 1965 and founded the International Society for Krishna Consciousness. Under his guidance we his disciples are carrying on this mission, but we must give all the credit to him and the other spiritual masters in the Brahma-Madhva-Gaudiya disciplic chain—including, of course, Madhvacarya.

Posted by Hare Krishna Community Jaipur at 14:05 No comments: 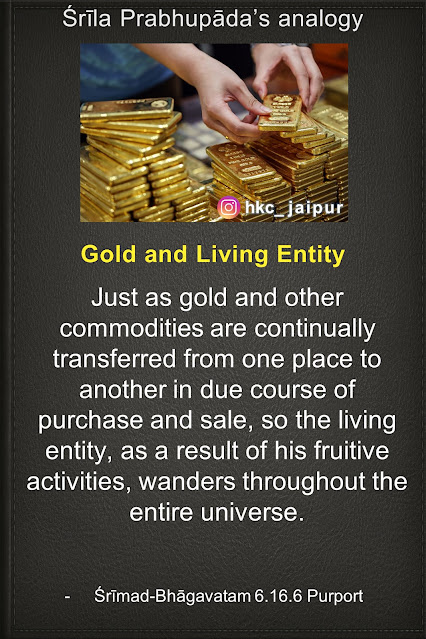 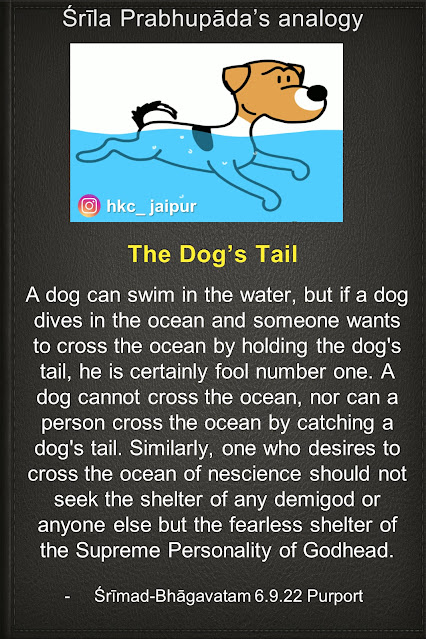 Posted by Hare Krishna Community Jaipur at 12:56 No comments: 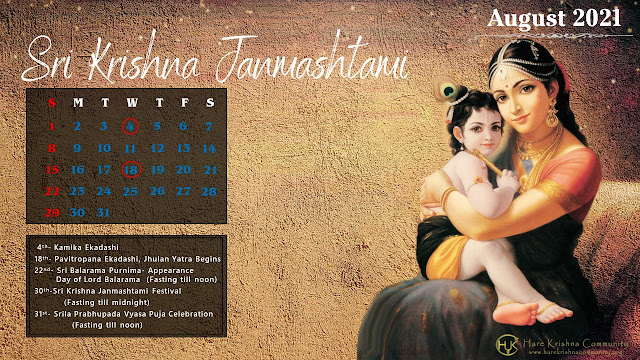 Posted by Hare Krishna Community Jaipur at 11:57 No comments: 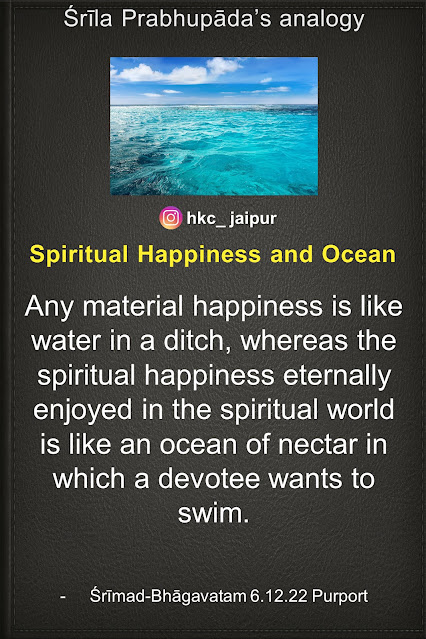 For more analogies:https://bit.ly/2tM9Oqa
Posted by Hare Krishna Community Jaipur at 14:17 No comments: